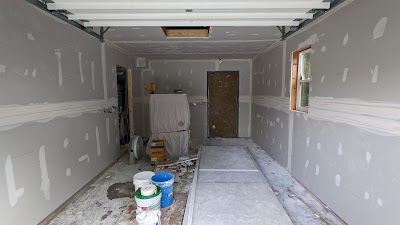 As far as the car goes - no progress to report. I have done absolutely nothing to it since we moved into the house nearly a year ago. It has been moved between garage spaces as we have gutted, insulated, and drywalled each space.

This is the 1 car garage where the car will ultimately wind up - this picture shows the day after the drywall went up. It now has primer on the walls and the lights are mounted. We bought the paint for the walls and it should be going up tomorrow. A new garage door and opener will be installed near the end of the month. We're installing a new door at the back and I need to frame out the openings and window.

The 2-car garage needs some more work before it'll be considered 'finished' but it's close. We'd be a lot further along if not for having to replace the entire driveway. In a month or so - we should have the entire garage space fully gutted, cleaned out, re-insulated, and closed up. It's going to be a nice space when it's done.

As of right now - the car will have to wait until next Spring. I'll hand-turn the engine to keep the lubrication going inside and make sure I don't have any issues with the seals/rings. It'll need tires to be roadworthy as they're coming up on 10 years old.

"Maybe next year" is the motto for this car.