"Endurance is not just the ability to bear a hard thing, but to turn it into glory." 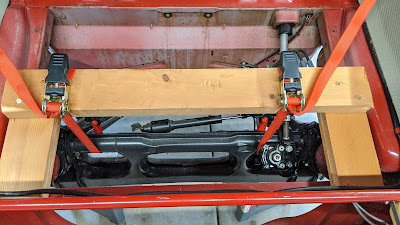 I took some time today to work on the car - pulled the front end, the rear subframe and marked where the body to pan holes need to be opened up. 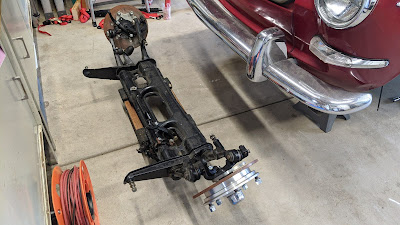 Front end removal was uneventful - which is a good thing - and it didn't take long.  Practice makes perfect, I suppose.  Having the rolling cart things makes moving it around the garage much easier. 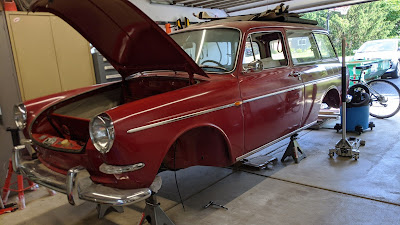 I'm back to having a 'hover car' - on 4 jack stands while I work out how to better support the body to allow access to dropping the floor pan so I can work on those holes.

If I can carve out a couple of hours at least once per weekend - I can make some progress.  I'll do more during the week once I figure out how to make the time.
at June 28, 2020 No comments:

"With foxes we must play the fox." 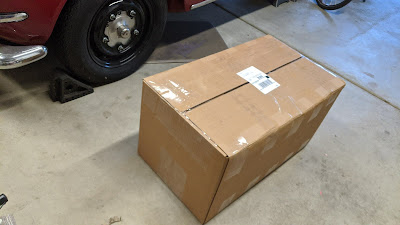 Still slower than reasonable but I managed to get the engine and transmission pulled from the car AND get the transmission packed and ready to drop off in less than a week.  It should have taken 2 days but at least it didn't take another year.

The bathroom hasn't changed in weeks - hoping to get that shit wrapped up here real soon.  I'm tired of looking at it and dealing with it.

Maybe I'll get around to sending the spring plates off for plating - there's a near zero chance I'll be able to drop them off personally.  Perhaps that can be the target for next week - then I can feel like something was accomplished that week as well.  Working too fast on this would certainly spell disaster, right?
at June 24, 2020 No comments:

"Extraordinary people survive under the most terrible circumstances and they become more extraordinary because of it."

I guess I should start with the good part - I started my new job and it's a great fit for me.  It has all of the things I like and a few new challenges to encourage me to grow professionally - so all around, it's a great thing. 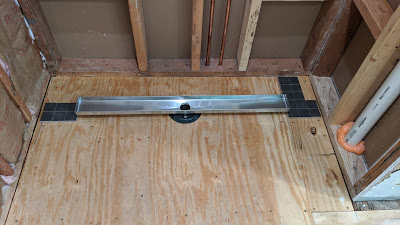 The tile contractor that was supposed to start on Monday - didn't.  They called on Sunday to say that they were declining the job because they didn't have a signed contract and took another job the previous day.  I had the contract in hand with a deposit to hand over on Monday.  But hey, fuck them - this is a good thing.  I fixed the drain situation and have looked into getting a prefab drain panel so things will change again real soon.

I've got two quotes - the first one is attractive, the second dude gave me the "I don't want the job" price and I will get another quote Wednesday.  Then we will make a decision and get this shit going (I hope).  I'm so fucking tired of this bathroom and all of the nonsense that comes with it.  I hate the house we bought but I'm going to channel that into making progress somewhere - even if it's not on the house.  Which is how I made progress on the car today. 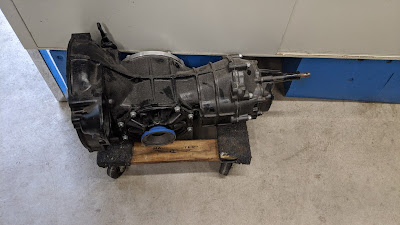 I pulled the exhaust, the engine and the transmission.  As soon as I find a box for the transmission, I'll get that moving as well.  I mean, I did tell the trans shop that I'd be sending it back - oh, what...a year ago?  If I get this box thing figured out - I'll have to reach out and let them know it's coming for real this time.

Or it'll sit on the floor of the garage for another year while I get distracted by other shit. 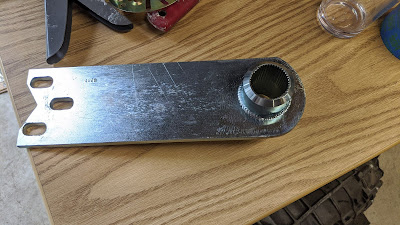 I've ground the edge down on the spring plates and have to get those sent out for plating work.

While I'm waiting on all of that stuff - I might get back into the wiring stuff that needs to be done.  I've also got to figure out how to open up the holes for the body to pan issue.  I also need to work out how I'm going to mount the seat belt brackets on the floor.  Still lots to do. 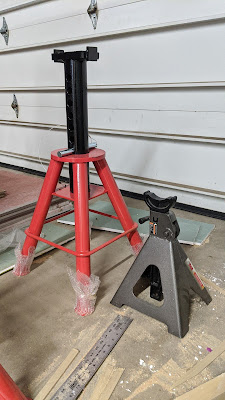 I have the strategy but seriously lack the execution.

I had this week off between jobs - the plan, the strategy was to spend at least two of the five days off pulling the engine, the transmission and then package the transmission for shipping to get the case replaced.  Grinding down the edge on the spring plates and getting them replated. The other thing I wanted to accomplish was to mark and drill the holes for the seat belts and figure out the hole issues between pan and body.

I accomplished absolutely none of it.

I did, however, find and buy a pair of these gigantic fucking jack stands to hold up the body when I get to the point of pulling the pan to fix the mounting holes, the rear brake T and the seat belt brackets.

I made plans.  I made no progress. 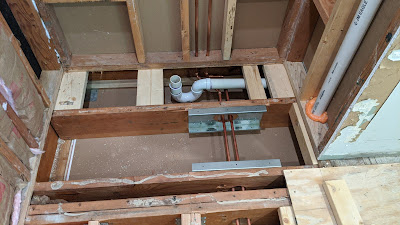 This is why I've made no progress.  The bathroom in the house I bought a year ago - this bathroom has been under some form of construction for nearly a year.  This bathroom has been a royal pain in my ass for a wide variety of reasons.  It was 'remodeled' when we bought the house and after we discovered a plumbing issue, we cut a hole in the ceiling of the room below to access the P trap of the shower - discovering there was no vent pipe for the shower or toilet.  Then we discovered that the floor joists were compromised with giant holes for the toilet that didn't work correctly. In the end, that bathroom and the 1/2 bath downstairs AND the ceiling of the living room  was torn out, an architect and structural engineer were hired, things were fixed and we started to see the light at the end of the tunnel.  Time was a commodity that I could spend with some flexibility.

Then, right before we reached the finish line, the contractor shit the bed, and things started going wrong. Very quickly, things went wrong.  Other contractors came in and reported that they couldn't do their part because of issues with the new bathroom.  As a result of a few small 'red flags' and a sense that those red flags were hiding more sinister shit because the contractor started making excuses for his work - I spent most of my 'free' week removing most of his work, fixing plumbing and framing shortcuts that affected the final outcome of the project.  I'm livid that I had to remove work that was supposed to be finished but I'm glad I did because I found a lot of janky shit that had to be fixed.  I will never trust another contractor doing work at my house as a result of this fuckery.

After a lot of research, agonizing, questioning and waiting - a new tile contractor is scheduled to start on Monday, and after several conversations, I'm cautiously optimistic they'll get it right.  Monday is also the day I start a new job - a job that is going to require a lot more of my mental attention and physical presence.  Odds are, I won't have a lot of time to work on the car with all of the other things coming together in this 'perfect storm'.  I'm going to attempt to spend a couple of hours per week getting things knocked off this list of shit to do so I can drive the car again but I can't hold my breath hoping that it'll happen.
at June 12, 2020 1 comment: