"Strength does not come from physical capacity. It comes from an indomitable will." 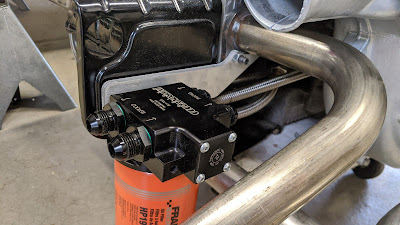 The latest version of the filter bracket arrived today - and after a very minor modification, it's a good fit. 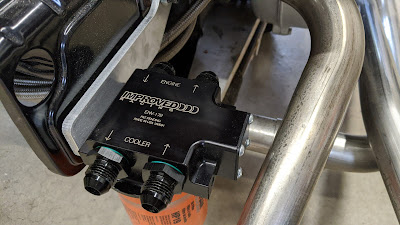 There's a good balance of space between the exhaust pipe and the thermostat end.  The exhaust pipe will be wrapped to reduce thermal influence with the thermostat.  I'll have to test it out for a while to know if it's successful but I think this is a good place to start.

If I have to modify this - the filter will have to go 'up' to increase the space between the pipe and the thermostat - which means a new bracket design - so I'm hoping that's not necessary! 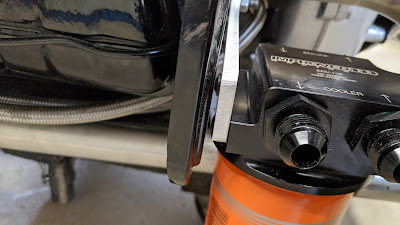 I'm using a super thin button head screw but it's rubbing on the engine tin - I figure I'll drill two holes in the engine tin, use a spacer of some sort between the bracket and the tin and mount the filter housing through the tin.  This will prevent the tin from rattling and rubbing against the bracket and it'll make it easier to remove the oil filter bracket if I need to do that. 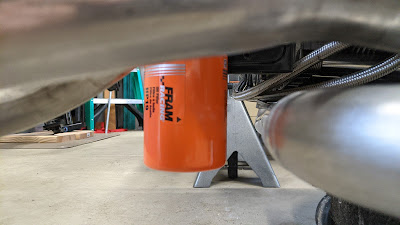 There's a good amount of space between the exhaust and the filter -and the filter hangs in a good place relative to the bottom of the engine, valve cover and tire on the car.  It's a good first pass and I'm hopeful that it'll work long-term.

I've had discussion of maybe tearing the car apart to get it painted but I'm still on the fence about that right now.  It'd solve the problem of 'what do to with the car' while the garage expansion is going on...but it's an expensive solution.  Time will tell. 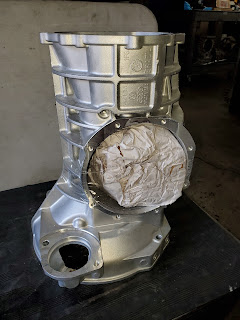 The transmission is underway - new rhino case - should be on its way back next week or so.  I like having a very knowledgeable dude working on my stuff - it's going to be nice to see it when it comes back!

"I have often marveled at the thin line which separates success from failure." 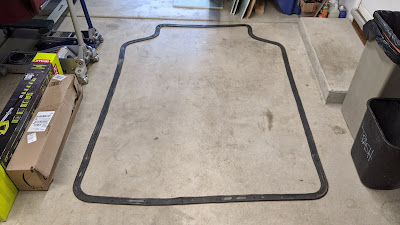 So I found this thing wadded up in a bin today...I laid it out to check out its condition - it's slightly flat but whole (minus one ripped area) and original.  There's some overspray from when the car was repainted back in the 80's.

I remembered back a few years when I was reading about how some random dude cleaned old rubber with Goop hand cleaner - the cheap stuff you find at the hardware store on the bottom shelf - it's about $3 for a tub and it cleans hands very well - no matter what's on them - they're clean when you're done. 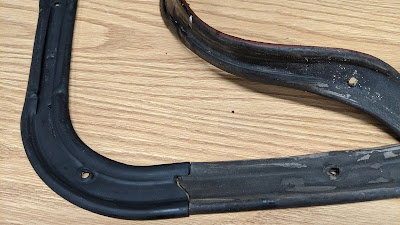 For shits and grins (and so I could say I 'did something' with the car today), I wiped some on the small corner of the pan seal that ripped - figuring that if I screwed something up, it'd only be a corner piece and not the whole thing.  If you think about it for a minute - you'll quickly realize that my logic makes zero sense.

This was the first pass - I cleaned the corner piece and then mated it up to the tear...not bad!  The rubber is soft and clean.  All of the dirt, adhesive and weird crap came right off with very little effort. 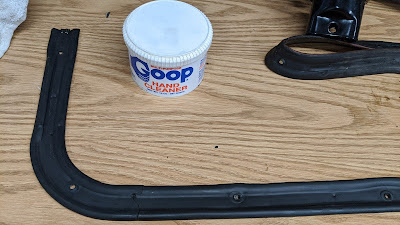 Here are those two pieces mated up again once I cleaned the other piece.

I may use this when I mate the body and pan with an adhesive - who knows how long it'll be there before I split them again to restore the car (maybe two years from now, maybe never).

So, yeah...I accomplished something small today - but it may have saved me a ton of time later.
at July 05, 2020 No comments:

"Fortune always favors the brave, and never helps a man who does not help himself." 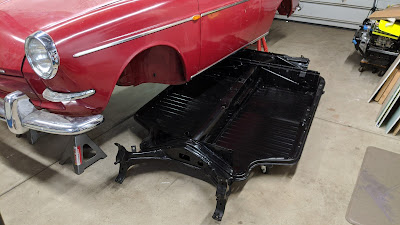 Got the pan out with very little fanfare and got to work on it.  One immediate distraction was the rear brake line to the "T".  I fiddled around with it for a bit trying to decide if I was going to relocate the mount (I've decided to leave it the fuck alone) and then I tried to figure out how to get a new line both into the two holes and not mangle the shit out of it in the process (I failed at this part).  Once I felt like I'd had enough, I moved on to the real reason I took this apart. 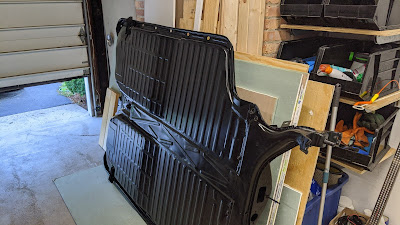 My paint pen markings were, for the most part, spot on and I only had to put the pan back once to validate fit.  I got all but three of the pan bolts into the pan with the pan washer/U boat things.  Both sides at the front are going to require some sort of modification to the washers to get them to work.  I haven't worked out which modification I'm going to try first.

I stared at the rear seat kick panel good and hard - debating about whether I should remove the mismatched one and put the new one in...and then I got a fucking grip and realized that chasing that rabbit would inexplicably add another year to getting this car running and I let that nonsense go.  It just fucking bothers me that I'm putting all of this effort into this car and it's not going to be complete or correct.  My expectations are my own worst enemy.

"Over every mountain there is a path, though it may not be seen from the valley."

I started the process of removing the pan but wound up stopping short of completing the task - I had a work emergency that had to be addressed and it took up a large part of my day because of a difficult customer.  Each of the three times I attempted to get back into working on the car, my work phone rang and I had to stop.  When the third call came at 7pm, I threw in the towel and gave up for the day.  If I hadn't spent so much time on the phone and going to my office - I'd have removed the pan and probably opened up half of the pan holes. 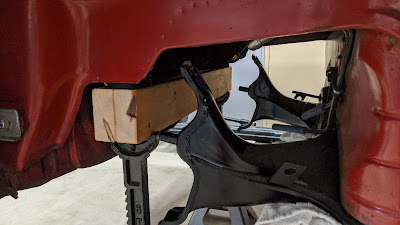 I figured out how to use two 'normal' jack stands and use those two giant jack stands that I bought - using hockey pucks to act as a buffer - to support the body while allowing the pan to drop down from underneath.  The car is at a good height but not as stable as I'd like because of the way the large stands are made.  It'll be fine for what I need.

I bought two new furniture dollies for the pan so I can slide it out without dragging it on the ground. 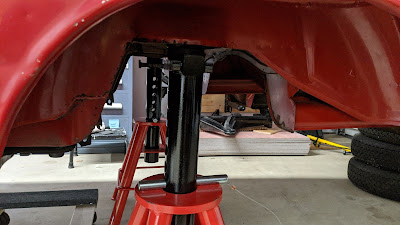 The transmission made it back to California - now it's just a waiting game to get it done and sent back to me.  I'm on the fence about sending the brake parts out for coating - simply due to the cost - I have to figure out what I'm going to do fairly soon because of how long it takes to get the work done.  My new target is to get the car back together by September - if I do something every week, that should be plenty of time...unless my new job takes over my free time.

The revised oil thermostat bracket should be coming to a close in the next several weeks.  It'll be nice to get that resolved and maybe figure out where to put that oil cooler.  I've got to cross some items off of my 'to do' list on the car and get closer to a driver.
at July 03, 2020 No comments: