A period of darkness is essential in order to expand personal awareness. 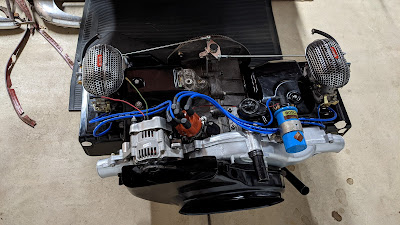 Today was semi-productive.  I took the spring plates to the plating shop, wired the fuel pump, installed most of the safety relay and put the engine back together.
I have a few more wires to attach before it's done.  For simplicity's sake, I left the lead for the CHT off this time around.  I'm not 100% convinced the start up is going to be leak-free so there's another chance that I can install it later.  All of the other leads are run and prepped for installation.
Small amounts of progress in the right direction - that's all I can ask for at this point.
at July 28, 2021 No comments: 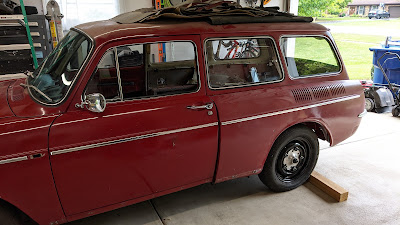 In a roundabout way - I got the car on 4 tires today.  I put everything together so that I could figure out if the spring plates are indexed properly.

It's a minor victory but it was nice to see that I managed a win today.

Additionally, I realized where I fucked up my rear caliper installation and have made a couple of changes to prevent it from happening again. 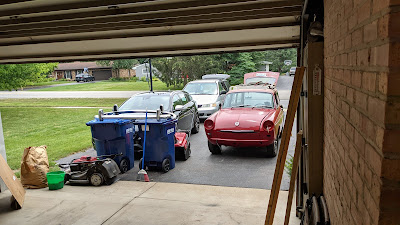 This is, eh...the 2nd time the car has been out of the garage since we bought the house a few years ago.

Engine dude showed up right after I took this picture and confirmed the oil cooler was leaking - handed me another one and went on his way.  I didn't do a lot with the engine today because I was focused on figuring out the suspension situation.  The fan shroud is back on and the pulley is back on - I should be able to get the rest of it put back together tomorrow.  I'm also going to attempt to get the fuel tank situated and the fuel pump installed and wired up to the safety relay.

The car is back on jack stands with the rear end pulled out in preparation for the drilling out of the chewed up spring plate cover mounting holes.  The nuts will only go on with the subframe out (one major downside) but I've got a few other things to get done first - like have the correct spring plates zinc plated.  Once they're done, I will swap them out with the set on the car (they're rusting) and put it back together one time.  Brake lines are about all that's left on the list of things to do on the rear end.  I've got the few front end things to do and finish up the wiring.  In spite of appearances - I'm making some progress.  I won't be done before the end of the week though.  There are a few things I can do while I wait for the spring plates (like the entire front end and the wiring).

When the fight was over, nothing was solved, but nothing mattered. 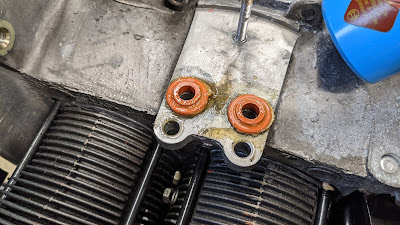 Today was not a great day, productivity-wise.  Got a sick kid at home and 40 things to get done this week...hard to focus.

I did pull the oil cooler and found oil pooled up underneath and the mount area very wet with fresh oil.  I cleaned the oil cooler out and removed the black paint from the exterior.

I called several local radiator shops and none had any interest in pressure testing the oil cooler.  The engine builder came by after a text conversation and picked up the oil cooler to test it and/or replace it.  Hopefully, tomorrow will be more productive and the engine will go back together.  I would like to get it in the car so I can finish up the wiring and get the suspension set properly.

I spent the better part of an hour trying to get NOS front indicator housing seals on the car in an attempt to get something accomplished today.  In the end, I gave up because they'd shrunk so much that they would not go on the car.

Tomorrow, I will attempt to get the spring plate covers mounted on the car so I can install the other trailing arm and brake assembly on the right side.  Once that's done, I can circle back and figure out brake lines.

The end goal is to get the car on 4 tires...I may need to adjust my approach to get there.

This car is far more frustrating than fun.

It is getting back up that defines your character 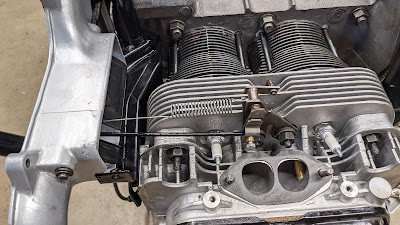 Mixed bag today.
Found a spring for the thermostat flaps, cleaned and painted the actuator rod and got both of those installed.  Replaced the tin on the right side of the engine.  Things were going well at this point. 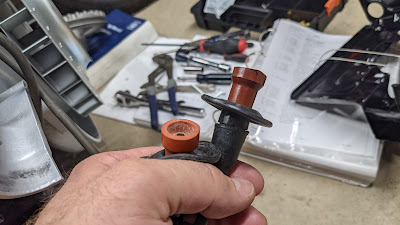 Then I removed the spark plug wires on the left side to get the CHT wire installed and found both spark plug ends broken off - there are no pieces anywhere so they were installed this way (they're also different colors).
More shitty engine builder corner cutting. 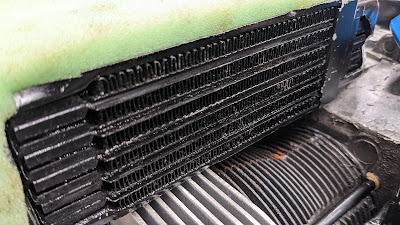 The oil cooler was wet with oil - no soaking wet but would easily stain a shop towel with oil.  Not sure if this thing leaks or if it just got oil on it.  I don't trust it - so now I'm on the hunt for another one. 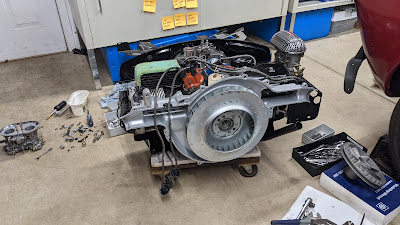 My rebuilt engine is in a different array of pieces because I cannot trust anyone to do the job properly.  No one can seem to replace broken parts or make sure shit works before it's put on an engine.  Just slap it together and hope for the best!
The one guy I thought I could trust has fucked up multiple things on one engine.
Jesus.Fucking.Christ.
at July 24, 2021 No comments: 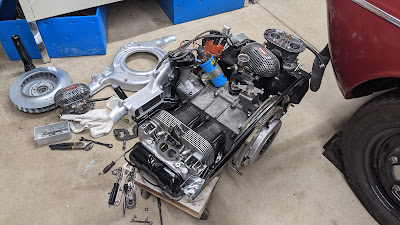 Spent a solid 30 minutes removing the top tin from the right side of the engine to get to the thermostat lever and bracket.  Odd, that the closer I am to this car  going back together, the more pieces I have to remove from the engine to get there.  At the rate I'm going, it'll be a long block in a couple of days just so I can fix minor shit that wasn't done right.

I am now held up by a thermostat linkage arm (that's not on the engine) and a spring that may or may not be at the builder's house (more on that later).  If I can fix the linkage and get the spring - I'll get the tin back on and get closer to installing it.

My final days at the job that's consumed the last year of my life are coming - two more to go - and then I've got a week to figure some shit out on this engine before I start the next job.  I'll drive this car someday.  Maybe.

To a failed experiment, the failure is unforgivable 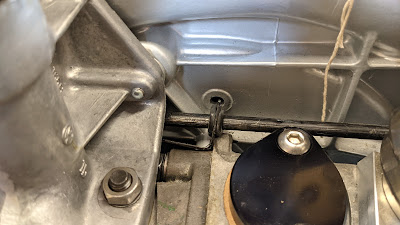 The engine came back today...and I noticed a few things right off the bat that I wasn't exactly thrilled about.  The carb linkage was on backward and there was a mechanical fuel pump installed.
I pulled the fuel pump and replaced it with the block off plate shown here - and then I noticed the center mount for the thermostat flaps was not mounted.  This is a MUCH bigger issue because the whole fan system has to come out to fix it. 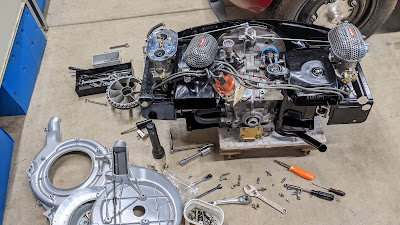 ...so that is what I wound up doing.  Removing the pulley, shroud, fan and shroud - all to flip a bracket around and install it properly.  Not hard, per se, but super fucking annoying.
And then I found that the thermostat flap spring is not installed.  And the rod is installed backward...so the right side tin all has to come off so I can fix that as well.
I flipped the carb linkage around so that it's mounted in the correct location.  I didn't get it all back together because I had to finish some other stuff around the house.
I should have more time to get shit done on this car in the coming weeks - I recently quit the job that required me to be on call 24/7 with super long hours and a ridiculous commute.  I have five more days of stupid, a week off, and then I start a new job with no weekends, no on-call horseshit, and normal hours and a significantly shorter commute.  My goal is to get a lot of this shit done in the week that I'm off.  I should be able to get the wiring finished and get the engine in the car (and running).  I'm not going to fool myself into believing that I'll have it all knocked out and done because, let's face it, that's not how this car works.
at July 18, 2021 No comments: