...and who gets the job pushing the knobs?

I located another reputable powder coating operation in the semi-local area.  I established contact and have dropped off the front brake parts for Nigel and the camber compensator parts for Ferris as a first go.  If these parts come back in good condition, I'll send more work his way until I'm able to have a garage full of correctly powder coated, ready to install parts.  I'm now on the hunt to find a paint shop that can correct the fubar'd paint job on the pan for Ferris.  I'd like to get that pan painted and start putting it back together soon.  There are a lot of parts just waiting for assembly and I'm itching to put something together. 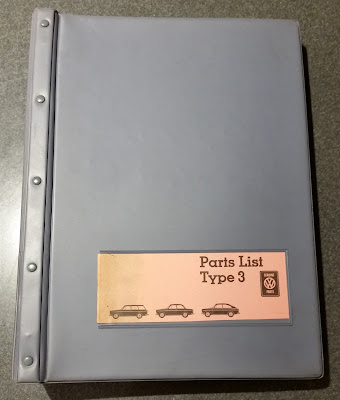 (UPDATE: Photo of the book now that it's clean)

The rear reflectors/housings from Italy arrived and they're in great shape, although they don't match.  One is SWF manufactured and the other is a Hella.  I wonder what the odds are of finding another SWF to complete the pair...

I'm hoping to get the first round of powder coated parts back before the trip to California...and I'm real hopeful that they're done correctly so that I can get the brakes back on Nigel right when we return from California.
at May 31, 2015 No comments:

I was put in touch with a seller in North Carolina via a contact in Germany about a right side NOS pop out window frame.  Some time had passed and I didn't think that the frame would be available...but I got in contact with the seller today and discovered that it was still for sale.  So I bought it.
I also found another Type 3 parts book.  The cover is dirty but the pages were clean and the dividers appear to be in good shape...it's getting close to time to sell off one of my other books (or at least some of the pages).

Still have the brakes to put back together before Nigel can come out for the summer but I feel like it's do-able and that I'll be able to drive him around a bit before he goes into storage for the winter.  I'm looking forward to driving the old guy around finally!

Patience is not simply the ability to wait - it's how we behave while we're waiting.

Made a deal today on a complete set of NOS rear reflector assemblies.  What I was really after are the reflectors themselves but I wound up buying the complete assemblies once the price was negotiated.  It became too good to pass up.  They're coming from Italy so it's likely to be a while before they show up.  Hopefully, they arrive before I go to California.

In addition to this buy; I found NOS screws for the front turn signal lenses from another source.

I'm convinced that if I wait long enough, I can find just about anything.

NOS Left side pop out frame 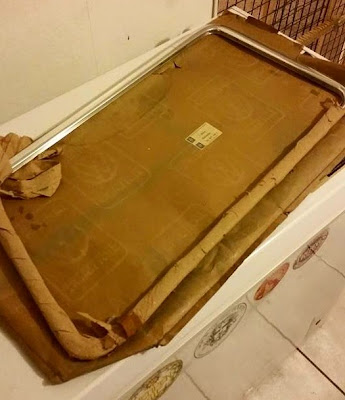 Left side NOS pop out frame.  Now the search is on for the right side.

I think that if I can find a complete pair, I'll be able to sell off/recycle the giant pile of spares I've collected in the garage.  I may also drop them off at the local plating shop and see if they can do anything with them prior to bailing out on them.  I'll have to dig them out and oil the screws to see if I can get them apart (the hardest part).
at May 03, 2015 No comments:

Sometimes the stories are better than the discoveries

I went on a bit of a parts discovery in the East Coast earlier this week.  I had four destinations on my mental itinerary when I arrived.  The first destination turned out to be a very nice place to stop.  My wife and I spent over two hours with the owner of a little VW shop, trading stories and learning about the local interests.  I found a few nice parts during the stop and later shipped them back home.  The journey was definitely the best part of the experience...I would have been just as happy to have departed with the stories and the interactions and no parts in hand.  They were the bonus to the experience.

The second stop was somewhat of a local legend but it turns out that the owner had passed away two years ago (information traveled too slowly to me apparently) and most of his stuff was sold at auction last year - right around the time I'd originally planned to make this trip.  Terrible timing on my part.  So that destination quickly evaporated - which was VERY unfortunate because I also heard that he had a LOT of Type 3 parts.

The third stop was physically present but the owner was not.  I couldn't get in touch with him so I had to forgo that destination as well.  Frustrating.

A lot of these spots where people have parts stashed away are evaporating and the owners of the remaining parts are more and more unwilling to entertain buyers.  I get it.  It's intrusive, people can be really unpleasant and some transactions just aren't all that worthwhile.  I don't know that I'd entertain someone wanting to dig around in what I've got after I'd spent years amassing my collection.

So, what did I actually buy?

Not pictured:  VGC ivory hood release cable/knob, NOS tail pipe mounting kit, NOS right side heater box (it's in a box on its way home right now) and the stuff shown below. 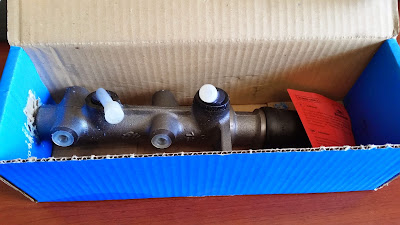 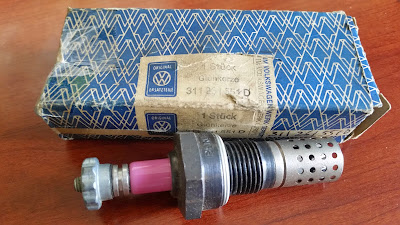 NOS glow plug for the gas heater.  Not many people need these but not many of these exist.  Very hard to find. 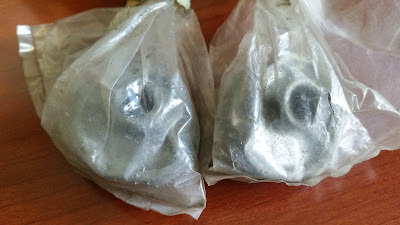 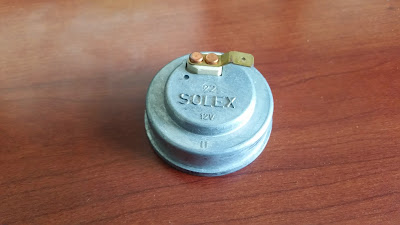 NOS 12v choke.  Last year while tuning the engine for Nigel, the left side choke got stupidly hot and subsequently removed.  I bought this one to replace it.


I've also scored a left side NOS pop out window frame and some other small parts for Nigel.
at May 02, 2015 No comments: