I've always heard that you have to take the good with the bad and just roll with it.

JB came over and we jumped right into the open issues.  After some thought the past few days, I decided to pull the Mexican VW rubber coupler from the steering system and replace it with one of the newer square Febi rag joints.  CB Performance used to sell the Mexican VW rag joint couplers (I bought two) and then they disappeared from their offering.  They appeared to be a quality part so I didn't readily understand why they were discontinued.  The Mexican VW rag joints are defective and the mounting holes don't line up properly-in addition, they warp themselves-creating the irritating gap.  Turns out that the the gap in the steering wheel and the angle issues at the coupler are largely gone now that JB replaced the Mexican VW part with the Febi part.  Problem solved.  Easy win. 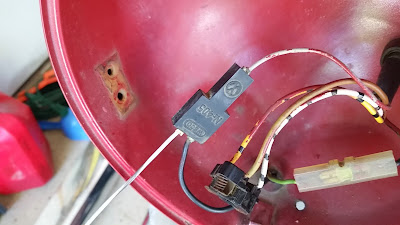 While JB worked on the coupler issue, I rewired the headlights with the new bulb holders and replaced the bulbs. (broken one on the left/newer design, sturdy one on the right/old design)  Easy win.

In addition, I pulled the wiper system and replaced the grommets with the correct size-they went right back in and everything looks just as it should.  I replaced the ashtray, glove box and cable controls and knobs.  Another easy win. 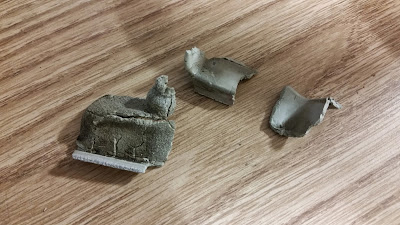 Pulled the side marker lights to fix what appeared to be bad bulb contacts.  I discovered crunchy seals that basically shattered into a dozen pieces when I pulled them off the car.  Replaced them with NOS seals and fixed the bulb contact issue.  The photo shows one of what remains of one seal.   Another easy win.

Next on the list was the brakes.  Took a stab at them as they couldn't be avoided much longer...I pulled the pedal cluster and then pulled the old master cylinder and replaced it with the one that was in the car when it arrived in Illinois.  JB and I bled the brakes.  Lots of air, no leaks.  Firm pedal 1/2 way which is good enough for a test drive.  But once again, 20 minutes later, the pedal went to the floor.  No leaks, everything is tight...reservoir level doesn't change.  Bled the brakes two more times and now have 1/4 pedal.  Not great but not a total failure...far from acceptable though.  We didn't swap the front discs as there wasn't going to be enough time with all of the other things to get done.  That decision turned out to be a good one...

Next we installed the fuel tank and put 2 gallons of fuel in the tank.  No leaks.

Then I tried to start the car.  Nothing.  Cranked it a few times.  Smelled what seemed to be burned wire.  The two wires to the tach were super warm...I REALLY hope I didn't fry the tach.  JB pulled the tach wires and we tried again.  Nothing.

Tested for spark at the wires and found nothing.  So I pulled a few plug wires at the distributor and found that they were not completely inserted into the cap.  Swapped the wires with new Bosch wires anyway.  Nothing.  We have fuel and air but seemed to be missing spark. 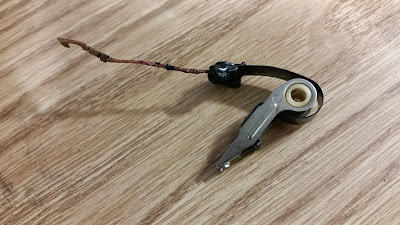 I pulled the distributor cap to check the rotor and discovered a burnt smell and noticed that the points had fried themselves to a black plastic blob (wire sheathing).  Swapped the points with new parts but ran out of time before adjusting them to spec...so the car went back into the corner until I can find time to work on it again.

I'm probably going to put a different ZV JCU 4R3 distributor in the car since this one probably has a fried condenser as well.  They're kind of difficult to work on while they're in the car.

Just for the hell of it, I have a Bosch 12 volt coil on its way in to swap out with the one that's in the car.  I don't know if it's fried but I'd like to have a back up in any case. 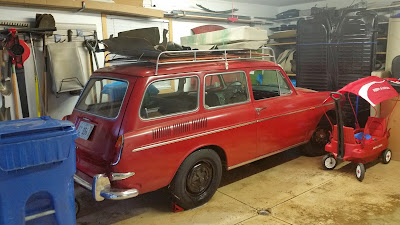 Solved a few problems and found a few more to take their place.

The car was pushed back to its side of the garage while I work out what I'm going to do next.  If history is any indication, swapping the distributor to correct the points issue is only going to bring another challenge.

I don't know when I'm going to have time to work on it again so it may be a while before anything notable happens.  I've never had a car fight so hard to stay in the garage.
at October 03, 2014