I've tried and failed three times to contact the shop where I bought the alternator to get a replacement.  I'm going to have to put the generator back into the car just to address the other issues for now.  I'll deal with the $300 boat anchor later...another seller that I cannot trust.  I'm still on the fence about getting a rewound generator for the smaller fan shroud or trying to find a replacement alternator.  I would like to have more output than 30A because of the lights I'm planning for the car but now just isn't the time...too many other things going on that demand my attention.  I'll get to it soon enough. 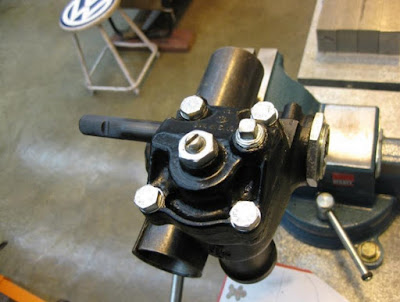 A bit of good news:  I'm getting a third rebuilt steering box back from the pile of five that I sent to Oklahoma.  It'll be the last - I originally thought I might wind up with as many as five units back but the internal parts were in terrible shape and both rebuilt units were poorly rebuilt.  Not enough parts to build five units but enough to build three...that's plenty for one car.

The other parts I've ordered for the future restoration of Nigel are all inbound - then there will be a period of stasis where nothing happens and no parts are purchased.

Hopefully, the period of silence will be ended with a series of nice leaps forward in progress.