New technology for an old car 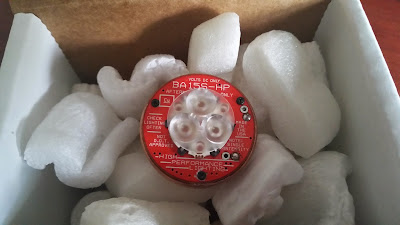 It fits and functions as I expected-although I've only tested it under sundown conditions.  It is at least 5x's brighter than the stock bulb which is not very bright.  I know that antique vehicles have dim brake lights and pay attention to them when driving behind them but I know that most other people don't pay that much attention to them.  I'd prefer that, as a driver of an antique vehicle, I don't become a statistic.

I'm going to do additional testing during normal daylight hours.  I think that'll be the real test of form and function since pretty much anyone can see brake lights during the darker hours of the day.  If it's just as bright during the day (red car, brake lights, day light) I'll be satisfied with the testing.  I may just push the car outside in the morning and check it out...still no fuel tank in the front end (blah!).  I'm also waiting for the box from Germany with my bumper bolts to attach the rear bumper.

These bulbs might be expensive but I consider it cheap insurance in preventing someone from rear-ending me in traffic because they didn't see the brake lights.