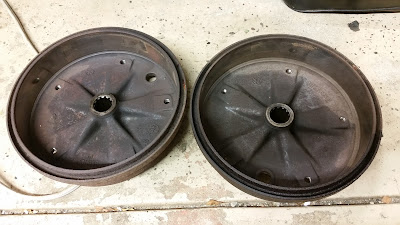 Pulled the rear drums off today with the hope of them being in decent shape so I could help out a fellow T3 owner...alas, they're in rough shape, so they're going into the scrap bin - the NOS drums will go on the car as I've all but abandoned the idea of swapping over to rear disc brakes for now.  Who knows, by the time I get around to getting Ferris up on tires, I may change my mind and shift the lightly worn NOS units to Ferris while I put rear discs on Nigel.  Time will tell. 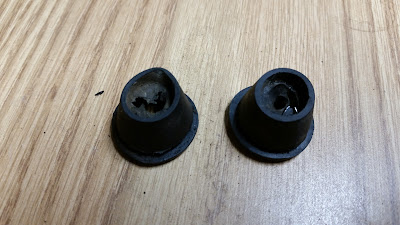 In other news, I also pulled the main brake line out of the center of the car.  I forgot just how much stuff is crammed into the left side of the rear of the tunnel - it's pretty tight.  I got the main line out and found these two crusty individuals as the grommets at the rear end - they don't look anything like their identified replacements, which have a MUCH smaller diameter midsection.

Because I think I've got at least two of everything - I actually have the exact replacement for these two worn out bits and they'd be a lot easier to deal with since my brake line is already assembled vs. the newer pieces.  Someday in the future, I'll be pulling this pan apart to get the floors welded in so they'll get replaced well in advance of ten years from now.  I'm hoping to have some time in the morning tomorrow to tackle some more work on the car.  All I've managed to do so far is take more parts off of the car - I've got to start putting them back if I stand a chance of putting it back on tires again.
at November 26, 2015