You know you like it but it drives you insane 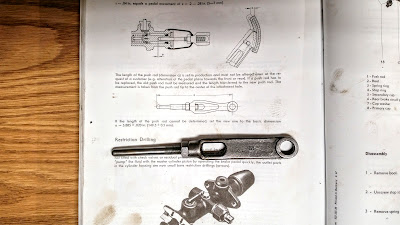 I stopped 'trying' yesterday after I installed this brake rod - adjusted to the 149.5mm length shown in the Bentley repair book - and it didn't have the 5mm space (show at the top right @ 'x') between the master cylinder and the tip of the rod.  The pedal stop was adjusted all the way back to no avail.

So, on a whim, I dug through my parts and found the exact rod shown in the book and I cleaned it, adjusted to the 149.5mm length and swapped it with the one in the photo.  Right off the bat, it fit better and - oddly enough, it was too loose.  This simply meant that I could bring in some of the play on the floor stop.  I'll now go on a bender to find another one... 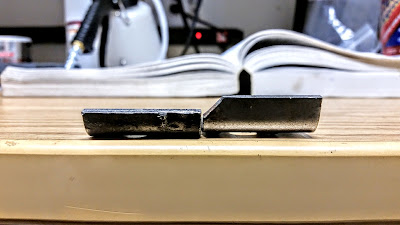 Once the floor stop was adjusted and tight, I pulled the brake return spring over the seat on the pedal cluster.  And then the brake pedal swung forward-pulled by the tension on the spring.  The stop on the floor had suddenly failed to stop the pedal.  I removed the OE pedal stop and retrieved a replacement new part I bought a while back.  First thing I noticed was that it was a good 5mm taller than the OE part - which is exactly what I needed.  I installed the new stop and it worked perfectly. 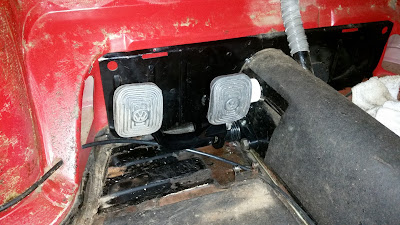 Which lead me to reach this point:  The cluster is installed, the proper gap between the master cylinder and the rod, the clutch pedal no longer experiencing the weird hang that it had in the past.  I don't know if it was the crap that'd accumulated on the floor (bottom of the pedal arm was scuffed) or if it was starting to make its way past the too short pedal stop and scuffing/hanging as it passed.  I'm officially closer to bleeding the brakes. 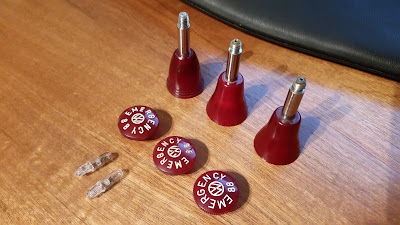 In other news:  I sort of volunteered to help out a new Type 3 owner in the UK with cowl drains that I don't need - and the discussion about the emergency flasher bracket/light came about...I dug out the three of the four knobs that I have and pulled the bulbs - I'll be on the hunt for a replacement the day after Christmas so I can test the switch I'll be sending out with the one on the left.  I'll have three switches for two cars and that suits me fine.

I'm anticipating being able to wash my hands of the disaster that was the first disc brake kit (not to be named) in the next couple of weeks.  I took a deposit on it and it's packed and ready to ship.  Sucks that I'll be losing 50% of what I put into it but I'm done screwing around with what has simply become a distraction.

Speaking of distractions...I am still on the hunt for a decent adhesive remover to clean up the inside of the car.  I'm on my fifth product with no positive results...maybe it's just too cold.
at December 24, 2015