A day of progress 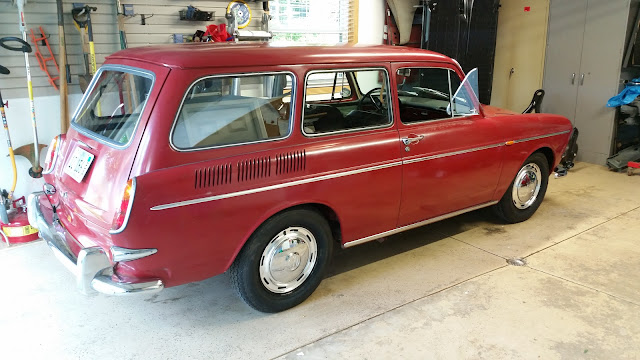 After a bit of a rough start to the day, I got back into tweaking the things I fucked up a few days ago.  I took everything back to 100% stock settings and the car fired up and ran - slightly rough.  I had to adjust the idle a bit to get it to continue running.  The idle is still low.

I've got a few weird things going on with the engine...the carbs are in sync, timing is set, valves are adjusted, point gap is good, fresh oil, new 93 octane fuel...but the engine will hunt a little after it warms up.  The only thing I know that contributes to idle hunt is a bad vacuum signal.  I did the suck test on the distributor and it works properly.  The hose is brand new German Continental.  The car runs fine, accelerates without hesitation, doesn't backfire or stumble.  Just the idle hunt...I've never run into this before so it's alien territory.

Once I put about 10 miles on the car, I returned home, removed the roof rack and washed the car - I've never washed this car - so it was nice to see it come clean after sitting for nearly a year in the garage covered in dust.  The roof rack is now suspended from the ceiling in the garage.  All of the window seals are shot so I expected to find water inside the car.  The hatch seal isn't on the car and the front trunk seal is crunchy...The car didn't really leak inside like I expected so that was a pleasant surprise.

The front steering is still a bit off - the steering wheel isn't centered (alignment shop screw up) and it wanders a little too much for my taste.  There's no real delay between the wheels moving side to side and the action from the steering wheel but the car tends to wander on the road at speeds over 30 MPH.  I checked the top control arm adjustment and it's nice and tight...new ball joints, new tie rod ends, new steering damper.  It's possible that my perception of how the car should drive vs. how it actually drives are not the same.  My V60 RD has very wide tires, the car itself is wide, it weighs twice as much as the Variant and has almost six times the horsepower.

I'm going to one of the few local VW shows tomorrow - I thought about driving Nigel but I'm not quite happy with the driving mannerisms just yet, it's pretty far away and it's supposed to rain.  The rain bit wouldn't normally deter me but I never hooked up the wipers when I converted to 12 volt.  It's one of those things that I keep telling myself that I need to do then wind up doing five other things instead.  In addition to that, there are a couple of odd noises while driving that I need to figure out...one sounds like I'm dragging a grocery bag under the car (I'm not - I checked).  I don't know what's up with that yet.  I'm thinking about taking the camera and making a video of a drive around the 'hood to see if I can capture the sounds.

Along with all of the other stuff, I sold off two of my early ignitions that I'd kept for parts - one was broken at the front, the other at the rear...working on selling off a few other pieces as well.

I tried to sell the front beam that I stripped down bare but the shipping cost is too high so no one will buy it.  I think I'm going to use it to test my painting skills (they're weak) and as a clamp to disassemble the steering boxes that I have.  It's time they come apart and I figure out how to rebuild them.  In the same vein, I scrapped three rusty heat exchangers today - I pulled a couple of spare parts off of them and put them at the curb.  Within 20 minutes they were gone.
at June 25, 2016