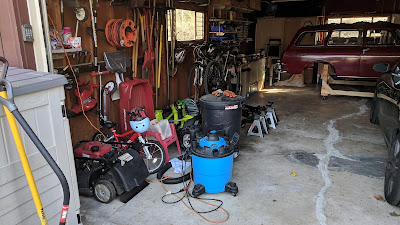 Nigel is turned sideways and pushed to the back of the garage so that we can fit at least one of the two 'regular' cars in the garage.  In addition to all of the random stuff in the picture - a snowblower has been added to the garage inventory and floor space has rapidly vanished.  In order to fix the poor workmanship from Randy - I'll have to remove the pan from the body and set it up on sawhorses or jack stands and I just don't have room for that with one of the 'daily drivers' in the garage.
For a short time, I debated dropping the pan at RediStrip and having it dipped - but I can clean away the botched sections of the pan - fix the welding, install the correct parts, clean, strip and paint them to match the rest well enough to get the job done without the added work of repainting the entire pan.  The interior side of the pan will be mostly covered up by insulation so I'm not as concerned with perfection there - just that the two halves of the kick panel match - unnecessary holes are welded shut and the dents are removed where possible.  There are a few other welds that need to be cleaned up and then it should be ready for paint touch up.  I'll likely address the issues with the subframe at that time as well since it's easier to paint things in batches.

I borrowed a wheel adapter from Jim and dropped all ten wheels off at the local Midas - they said they could do a quick wheel spin to determine which wheels were bent and which are straight.  I was quoted a time of about 2 hours to do the job.  After 24 hours of no contact by them, I went to the shop to discover that they were done and claim that only one of the 10 wheels is straight.  They damaged the wheel adapter so when I returned it to Jim - we discussed it and after trying to determine a value, we agreed that I'd pay him $50 to replace it.  So, it cost me nearly $100 to check ten wheels for straightness - and I bet that they didn't even check them all so I'll have to do it again.  I wrote them a nice one star review on Google for their shit effort.

Now that I'm back to the working world - this project is now on hiatus until Spring.  There will be a few updates as they happen (or if they happen) - otherwise, it's going to be quiet here for a while.
at November 12, 2018