I wanted to seek but I got distracted 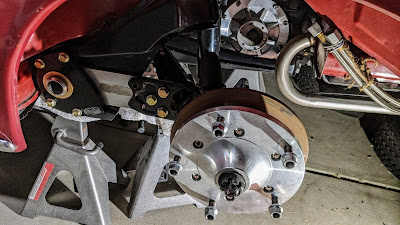 This doesn't look like much but it represents the surmounting of a rather large obstacle in the journey to getting this car back together and driving - my motivation to work on this car.

Two days ago, it was snowing...today it was up near 65°F.  I mowed the lawn and pulled weeds. On my way into the house, just before I closed the garage door, I stopped to look at the car sitting in the garage covered in dust.

I decided to take a look at the rear end and see if I've got any new ideas for the few minor modifications that are required to put the back end together.  I didn't come up with anything for the rear brake lines - after a short time, I realized that it'd probably be easier to figure out if the shock and axle assembly were in place. I swapped out the trailing arm because the one that was in the car had a malformed bump stop mount - and I've got three fucking sets for one car, so why not?

I pulled out the parts for the rear stub axle, grabbed the parts book for an exploded view of assembly and set about assembly. A short time later, I swapped out the trailing arm and then spent an hour trying to figure out just where the hell I was going to put the oil filter/thermostat mount.  Late into that hour I discovered a suitable location just behind the engine tin, slotted in the curve of the CSP Python exhaust.  I can get to the valves without it (or the hoses) getting in the way, it won't be as susceptible to road debris and at least one set of braided lines will be short/straight.  The mount location will require fabrication of a bracket that'll hang on the exhaust studs over the header but it should be rather sturdy.  I'll make a test piece before I go spending the money to get one made.  I'm content to have a location worked out at this point.  Next up will be figuring out where/how to mount the actual cooler.  Once I get past this obstacle of oil cooler/filter mount, I should be able to clear my head enough to get the other shit done.  I'm super distracted by this part for some reason.

My list to finish before it's on the road again: