"The best work is not what is most difficult for you; it is what you do best" 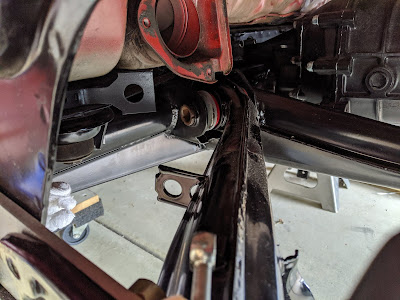 I sat with my head in the wheel well for a solid fifteen minutes - just looking over the landscape under the car.  I took in what it'll take to get the parking brake seated in the tube (bend the tube up a few degrees - hopefully without splitting it), checked out the "T" mount for the split to the rear brakes (it should be relocated about 1/2" to the right to center it on the hole), looked at the routing for the parking brake cable (a little more work to do on this piece) and, finally, I reviewed the route the braided brake lines will take when they're installed. 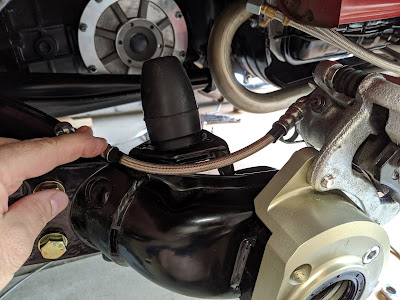 Initially, I tried to install the brake line on the rear caliper using the banjo end but that wound up having the brake line go in a direction that wasn't ideal - so I flipped it around and used the other end.  With a slight tweak, I was able to find what looks to be the right route for the brake line.  Because of the route of the brake line - I might be able to run one hose vs. two in the Swing Axle set up.  The stock bracket location on the IRS trailing arm will be either removed or relocated - depending on geometry of how it all comes together. 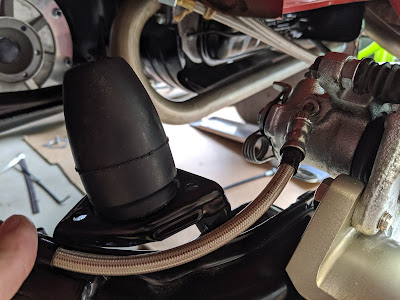 A closer image of the routing of the brake hose from the rear caliper.  This trailing arm will be used as the 'guinea pig' to get everything fit properly before any permanent modifications are made.

I will have to get new parking brake cables made for the IRS rear end - the Swing Axle cables are too short. 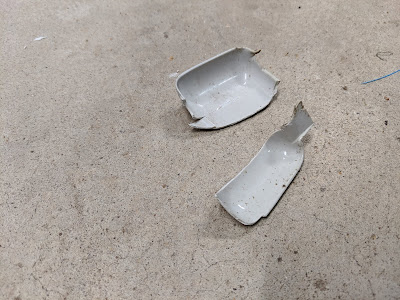 Next up on the list: Installing the Wolfsburg West vent window trim felt for the window.

The first thing I did was break the already severely cracked finger cup in the driver's side door.  It was only a matter of time - sucks to break a hard to find part though. 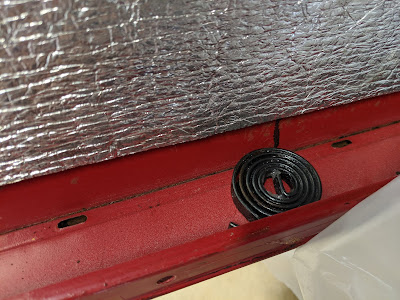 Then the spring for the window regulator fell out while I was maneuvering it to get the window track loose.  I also found that two of the spot welds on the regulator have cracked off - making the regulator arm more flimsy than it should be. I'll have to swap the regulator out or weld up the one in the car - neither of which are all that difficult.  Just one more thing to add to the list. 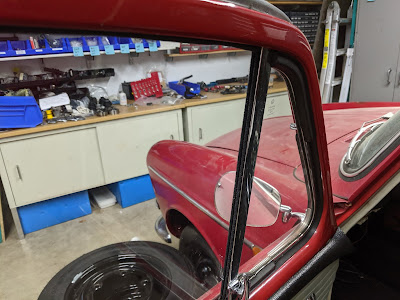 Once I got it all loose, I was able to remove the shitty felt piece and install the Wolfsburg West felt that I bought about a year ago.  I didn't glue it in place - just slid it in and put it all back together.  The fucking window works now!  It flexes a lot when rolling it up and down (because of the broken window regulator) but it's significantly better.  I was also able to better align the window track so that the scrapers fit slightly better.

I bought Mario's updated outer scraper rubber but I'm going to hang on to that for a while before installing it. 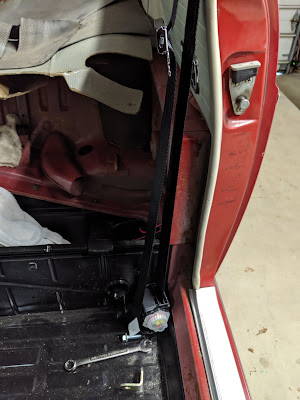 Another thing being explored:  Installing front seat retractable seat belts.  Once I'm able to successfully tackle this - I'll work on them for the back seat.

Seems rather insane to 'start' something new when I've already got so much going on - I need to suss out everything that has to do with the pan so that I only have to pull it apart for modifications and repaint ONCE.  That's the goal, anyway.

My theoretical steps as of now: