"Let it come and let it be" 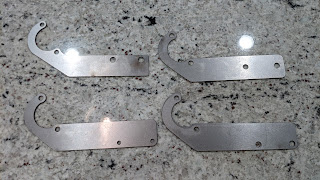 A bit of progress today...I made several revisions to the existing bracket to hold the Jaycee oil filter bracket because it has larger diameter mount holes and the bracket has been 'beefed up' through a small adjustment.  This time around - I had them cut out of 1.5mm thick plate steel - so instead of getting one bracket for $45, I got eight test pieces for less than $30. 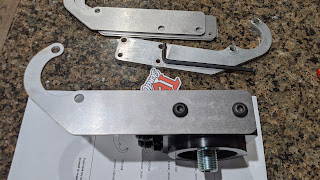 Of the brackets modified - this one is the closest to correct.  The holes for the exhaust studs are perfect, the hole spacing for the filter bracket is perfect...the bracket, however, is about 12mm too short, which causes a problem for the hoses coming from the engine.  I'm waiting for the last hose to be shipped to me and then I can confirm my modification (make it 15mm longer and adjust the location of the mount holes).  Once that's confirmed, I'll have a couple made in aluminum.  If I get a wild hair up my ass I might have one made in titanium for the hell of it...
I got in touch with the cable manufacturer - they shipped the cables two weeks ago...to my old address in another state.  The cable shop is going to make another set and ship them to the correct address so I should have those before Christmas.
Did some recon while at work today - there's only ONE fucking hydraulic hose shop in the area that can make brake hoses and get them certified - it's in Chicago.  I'm going to have to figure out how to get out there to get the brake hoses made up so I can stop by while I'm there for work as well.
The more I think about all of the modifications I'm making - the more I think it makes sense to go back to an electric fuel pump.  I kept the bracket from the previous installation so I'm going to put it back to work with a new fuel pump that I've had moving house for the last year or so...should be a simple modification to incorporate.  I like the modern touch of an electric fuel pump combined with the reduced pile of hose in the engine bay.  The safety relay is going to show up this week.
I also have a new wire harness from ISP West - the wiring on the car is getting really brittle but it's far too cold to be screwing around with wiring so it might have to wait until next year. 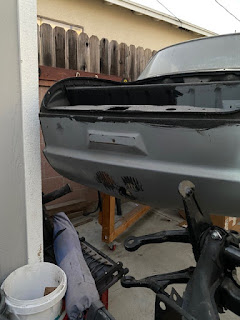 What appears to be a super straight, rust-free Mickey Mouse front apron found me a couple of weeks ago.  After a bit of 'back and forth' with the seller, we agreed on a price and I sent him a UPS label. I should be seeing that show up in the next week or so.  It's got the later license plate bump and the later divider but the MM lower front. An odd combination that couldn't be better suited for what I'm doing!  It's nice to wipe this off the list - it's the last body part I needed for this car.  Maybe I can sell the pieces I remove from the car and recover some of my investment.
at December 07, 2020