“You will do foolish things, but do them with enthusiasm.” 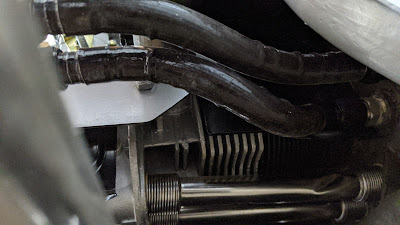 Received the second hose and it fits - for the most part - I revised the bracket design to make it 12mm longer for a better fit.  In a week, I'll get the revised brackets and, fingers crossed, they'll be a perfect fit!

House projects are winding down (finally) so I should have a little more time to get this car dialed in so I can drive it next Spring. 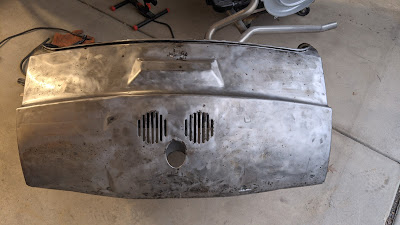 The front apron arrived on Friday - packed in two taped together Home Depot boxes that were very beat up.  Not the best packing job but it was fine.
Today I dug out the wire wheel for the grinder and stripped all of the paint off of the outside of the shell to see what was underneath.  I found a very thin layer of bondo and somewhere around five layers of paint in various shades of auto parts store rattle can. 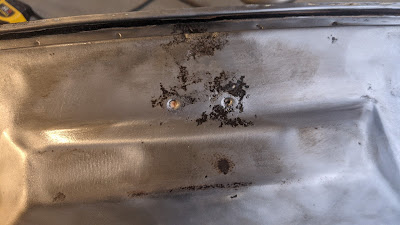 Above the license bump - which had no bondo on it - are two holes.  No idea why they're there but they're poorly filled/covered up.  There was a decent amount of surface rust under the bondo so it's a good thing it got stripped down. 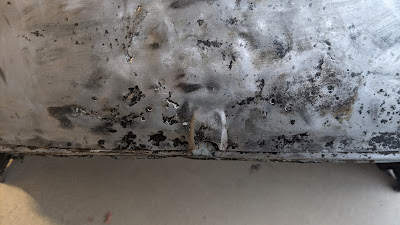 This is the worst part of the apron (so far) - it's the lower middle.  Loads of small bumps - sort of like my face back when I was in high school.  Truth be told - this looks worse in the picture than it is in reality - partially due to the not quite perfect stripping job I did on it.
I suspect this is why the bondo was applied because there aren't any other real noticeable issues elsewhere on the piece.

I may have gotten ahead of myself by stating that I could take this off of my list...I'm going to keep looking for a better piece.