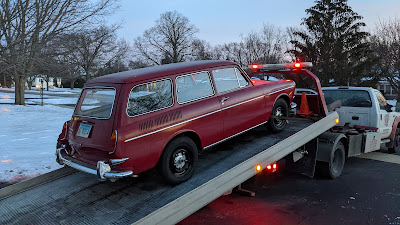 The car was moved via flatbed tow truck from the old house to the new house without much fanfare.  The driver was familiar with these cars and knew we had to turn it around in the garage to get it on the truck - there's really nothing to grab on the back end to haul it up on the bed.
30 minutes later, the car was in the new garage with a little help from the tow truck driver and my plumber to push it into the garage where it now sits. 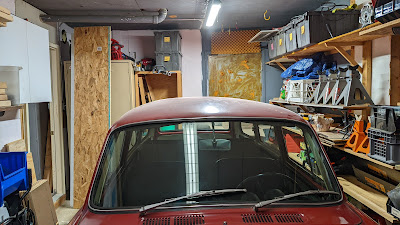 The first couple of weeks with the car in the new house have been uneventful - I haven't had time to do anything with the car - other than walk around it.  I did replace most of the previous owner's rickety shelving with properly mounted shelving.  It's tight in there now but will open up quite a bit once I have more time to dedicate to organizing the garage.  There's a lot to get rid of in the coming weeks.
For the first month - I've replaced two garage door openers, replaced 7 exterior locksets, removed the coax cable in the house, started installing ethernet cable, torn down LOTS of cobbled together shelving, removed several old fluorescent light fixtures, and replaced them with LED light fixtures, replaced five ceiling fans, replaced the kitchen sink faucet, installed a Nest doorbell, replaced the doorbell chime (which is no longer working due to old wires in the walls).  We had an electrician replace incorrectly installed 3-way switches, fix ceiling fan boxes (not wired correctly), install lights in the living room, and install hard-wired and interconnected smoke/CO detectors.  The plumber removed the RO water filter under the kitchen sink and replaced the water heater.  He's due to return to remove the water softener (not in use) and a bunch of gas line that isn't in use.  I'm about nine projects deep right now with an estimated completion date sometime out in late February.
When I do get back to working on the car - it'll be nice to have a place where I can dig into it without anything else getting in the way or having it be in the way.  Both of the daily drivers fit in the other garage - the first house we've owned where all of the cars (and our stuff) fit in the garage.  It's been a nice change.
It'll be quiet around here, minus the random updates, for a while.  I will have this car running/driving this year.