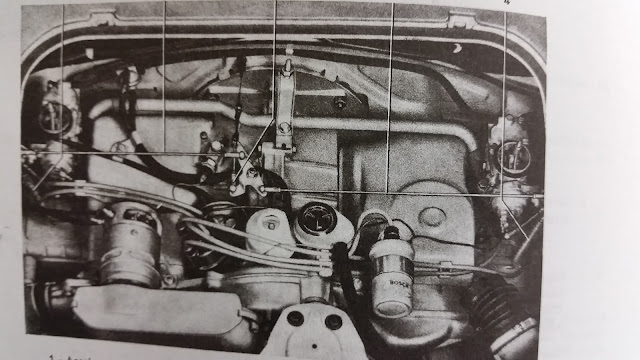 This image is out of the Type 3 Workshop Manual, printed in 1965, that shows the stock engine set up.

I noticed several things that never caught my eye in the past - little details like the location of the spark plug wire holder on the left side engine tin - or that the vacuum line for the carburetor goes up and over the carb body - not around it.  It appears that the engine tin is grey vs. black based on the contrast with the black hose and air intake bellows. 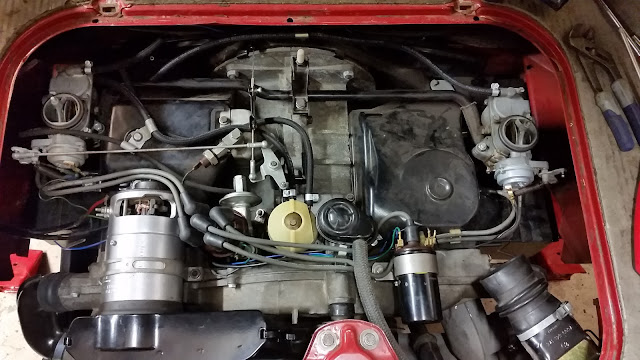 This image was taken tonight after I made a few changes to the engine bay.  I'm trying to get the engine to more closely resemble the stock engine image above.  There are a few things that won't match the above image perfectly - like the oil breather that appears to be grey in color vs. the black that became standard.  I made an attempt at getting the fuel lines under the oil pressure sender but there's no way that was going to happen - it might be due to the oddball extension bit that's on my oil sender bracket.  I'm not 100% sure why it has the extension but I'm not going to screw with it right now.

I'm waiting on my 'anti-siphon' valve before I connect the new fuel line and clamps (not pictured in the early car manuals).

I wound up swiping the fuel pump, stand and gaskets from my spare motor...it's now more 'torn down' than built up.  I've got to fix that - I've taken too many parts off of that motor at this point.  It's time to start putting things back on it so that I can test run it again in the Spring.
at September 14, 2015