I've been working on some rather random parts sales/trades in the past couple of weeks.  I traded a couple of parts that had very little value to me for some parts that have a much greater value.  I'm helping a couple of people source parts and services during my 'dry spell' so parts are being collected and made ready for a departure.  I'm happy to help others out and slim down my parts stash at the same time.

The parts I asked Mario to hold a couple of months ago are finally on their way - should be here any day now...I would know exactly when if the USPS would update their tracking information.  The tracking used to detail every movement of the parcel, now I'm lucky if it tells me once or twice before the box randomly shows up.  It was last scanned in NY a week ago so it'll show up any day now.  Probably when I'm not home...which means I'll have to chase it down at the post office.

I had an email chat with the Vintage Speed guy, Mr. Lee, and he says they can make a 'custom' Type 3 stainless exhaust that will allow me to use both upper and lower heat exchangers.  The lead time is 6 weeks and I owe him some dimensions with photos.  Looks like I'm going to sell off the exhaust I just bought because I really want to have both heat exchangers.  A little more research would have saved me a lot of time/money.

I'm also debating putting the Airkewld brakes up in the classifieds - who knows - maybe someone is more willing to resolve Pete's half baked product issues.  I also think I could fix what's wrong with them over the Winter since there won't be much else going on.  Still pondering what to do...would be nice to be able to use them vs. lose the money though. 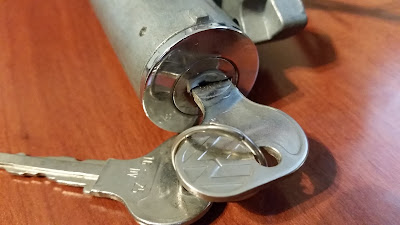 I sold my last DV profile ignition switch yesterday...I hesitated to sell it because it's just so damned nice.

It's what I'd call 'super NOS' condition...very nice condition all the way around.

No progress on the car of late - still working on the yard - but I'm still hopeful that I'll get the brakes bled before the snow falls.  I know, I'm running out of time.  The temperature has dropped 25°F in the last three days (it was 82°F on Monday and 65°F today) and that, along with the panicked look on neighborhood squirrel's faces, means that cold weather is coming.

It's a real harsh reality that I didn't even start the car ONCE this year.  I'm planning on draining the fuel tank because that fuel is getting closer and closer to varnish than fuel at this point.

There's always next year...where I can hopefully make some progress.  The Winter will be spent getting things painted, collected and sold as needed to slim down to the things I really need.
at September 30, 2015