Due to digging up the yard to install new drainage pipe and the beginning of a new landscaping project, I've done virtually nothing with the car in weeks. 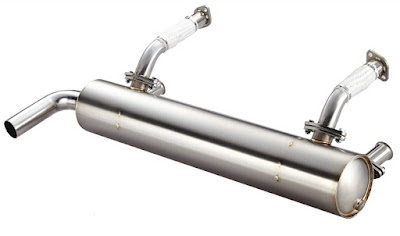 I did, however, finally buy a Vintage Speed muffler.  I'm hoping to get that project moving along - making an adapter for the upper heat exchangers on this muffler.

Other than that, it's been relatively quiet.  I'm not buying part lots anymore or hoarding parts - in fact, I'm still paring down what I've got.  I sold off some extra turn lenses last week and I'm hoping to have a guy who's going to buy the heat exchangers that are for a later car - he lives down state and plans to travel up here at some point.

Looks like next year is the year that I'll be able to get things rolling...the major house renovations will be done and I should be able to make some head way on getting the pan for the 65 back together.  Until then, I'll continue to collect parts relevant to the build for both cars and listen to the crickets watching my progress.
at September 06, 2015