One more for the shelves 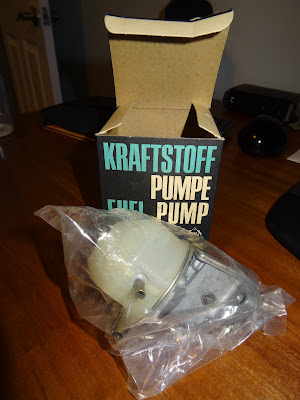 Fuel pump arrived today and it's the very definition of NOS.  The fuel pump is still sealed in its original plastic bag and, just like the seller indicated - the cap is mint.  It's a BCD, not a Pierburg, but several of the parts appear to interchange between the two manufacturers.

The second heat system elbow arrived as well - so I'll be collecting those parts for powder coating and dropping them off shortly.

I'm going to collect a set of the early wheel covers and drop them off for dent repair and re-chrome.  If that set comes back in good shape, I'll send the other two sets for the same work.

My goal is that I can get some of the 'behind the scenes' work done while it's too cold to work in the garage and still accomplish something.
at October 13, 2015