Little pieces of progress stack up like coins so that someday, I'll get to redeem them for a result

The engine is getting moved on Monday for an overview and tuning-my current schedule isn't allowing me much in the ways of time to be able to tinker on the car.  Fortunately, I have a local source for outsourcing the job and knowing that it'll come back in expected condition.  It should be back by next weekend since there isn't a lot to do on it and I might be able to drive the car a bit before ol' man Winter comes howling along.  The tie rods are probably going to need to be replaced and since I've drained the fuel tank, now might be the time to replace them.  The inner left is good but the other three are 'old' NOS.  Pulling the seals on the new 'NOS' and repacking the grease is to be done before they're put on the car.  I need to find a way to eliminate the steering wander and I'm quickly running out of parts to replace. 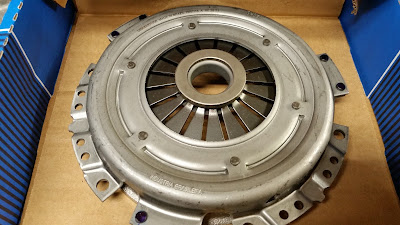 One thing I noticed on the pressure plate on the engine - it's the 3 arm type.  I've never liked that type so I bought the diphragm version, which I find to be much smoother.  As with so many other things, they're no longer made in Germany.  This one is made in Brazil. 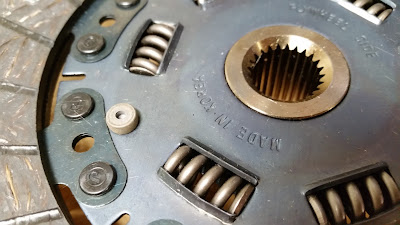 Clutch disc is made in Korea 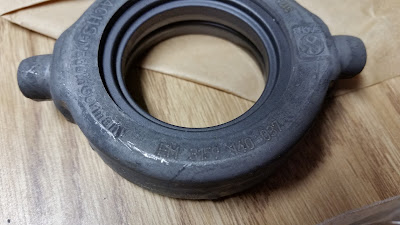 Throw out bearing is made in Germany.

I already had one of these but the kit was such a good deal (little over twice the price of this bearing alone) that I went for it - leaving me with a spare TO bearing.

I still need to check out the lever action now that the engine is out of the car to ensure that the weird hang is most likely to be in the clutch pressure plate actuation but I've been wrapped up in a professional certification process so the car has not seen much of me lately.

I got a bunch of other really small and seemingly insignificant parts as well - mostly screws and hardware.  I'd post up photos but I've already put them away.
at September 15, 2016