"Ambition is the last refuge of the failure." 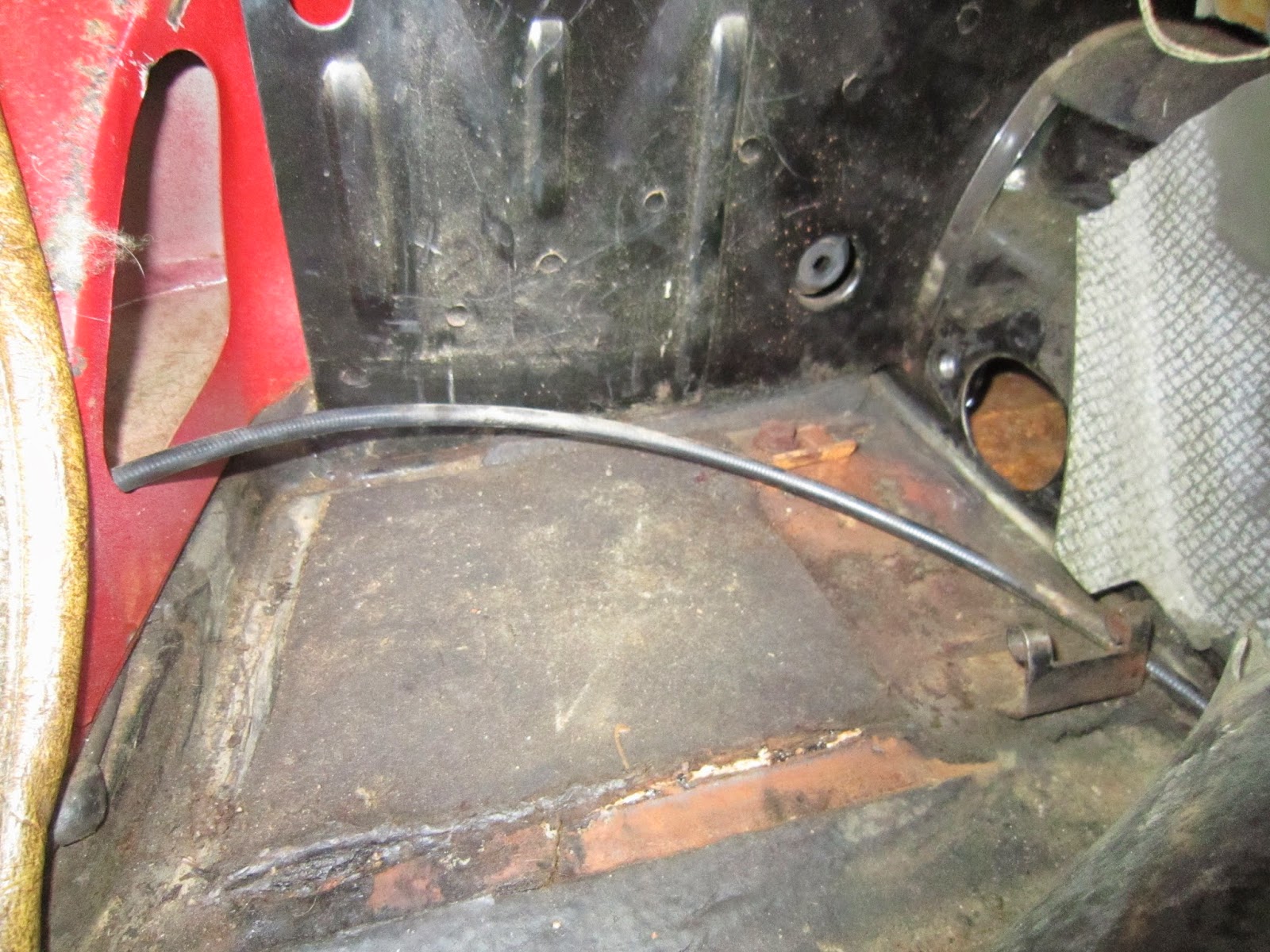 Removal of the pedal assembly was Job #1.  I managed to remove the old assembly, replace the clutch cable and get the new one installed.  There's an odd rubbing going on inside the tunnel - something to do with the heim link clutch cable end and the tunnel.  I'm not 100% sure how I'm going to diagnose the issue.

The older accelerator cable doesn't play well with the new assembly so I'm going to replace the cable the next time I get out to work on the car.  I got distracted fixing other things so this didn't get finished like I'd planned. 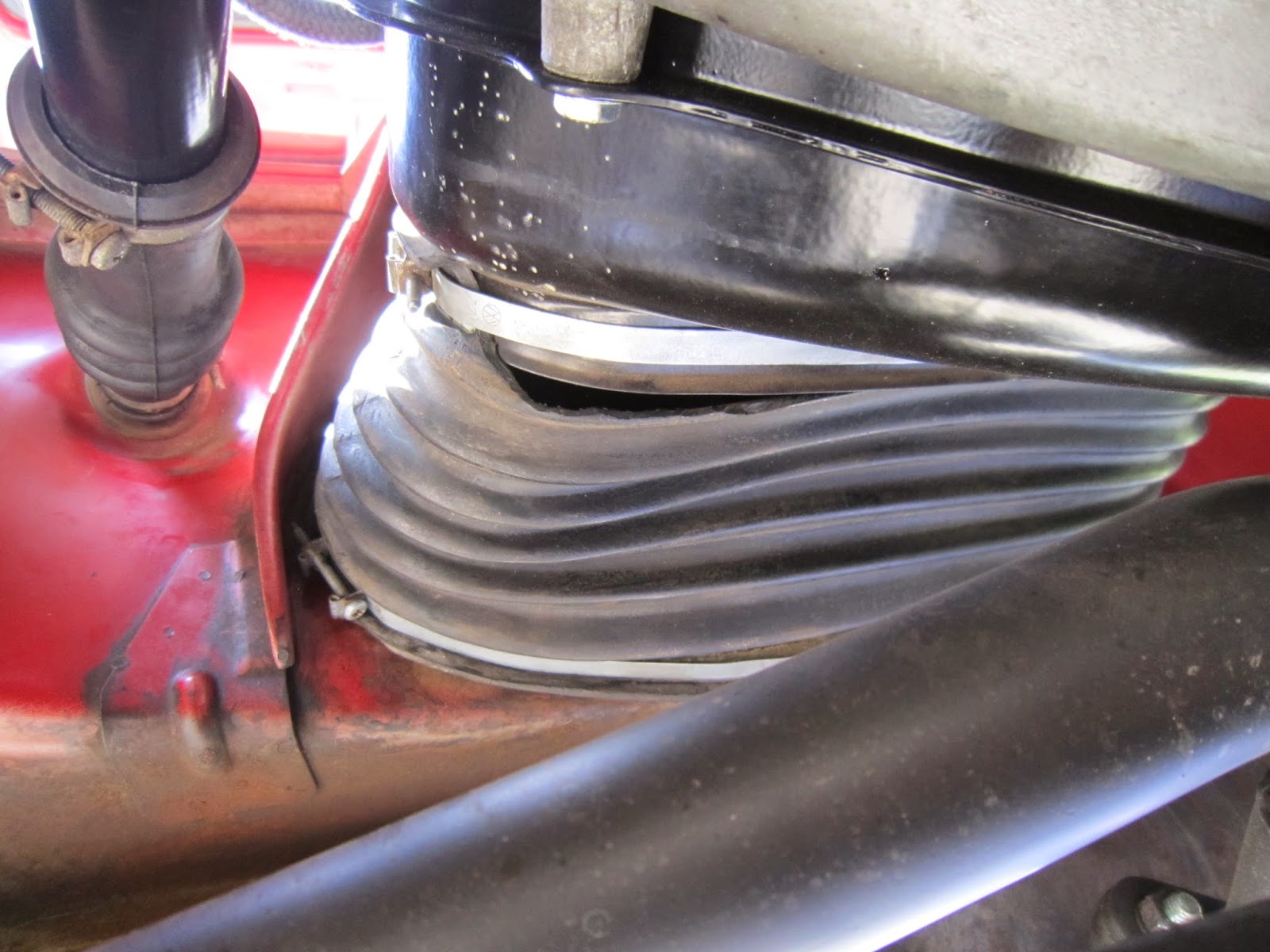 The torn bellows boot was the first thing I noticed when I crawled under the car today.  I replaced the boot and the clamps as those on the car had stripped screws. 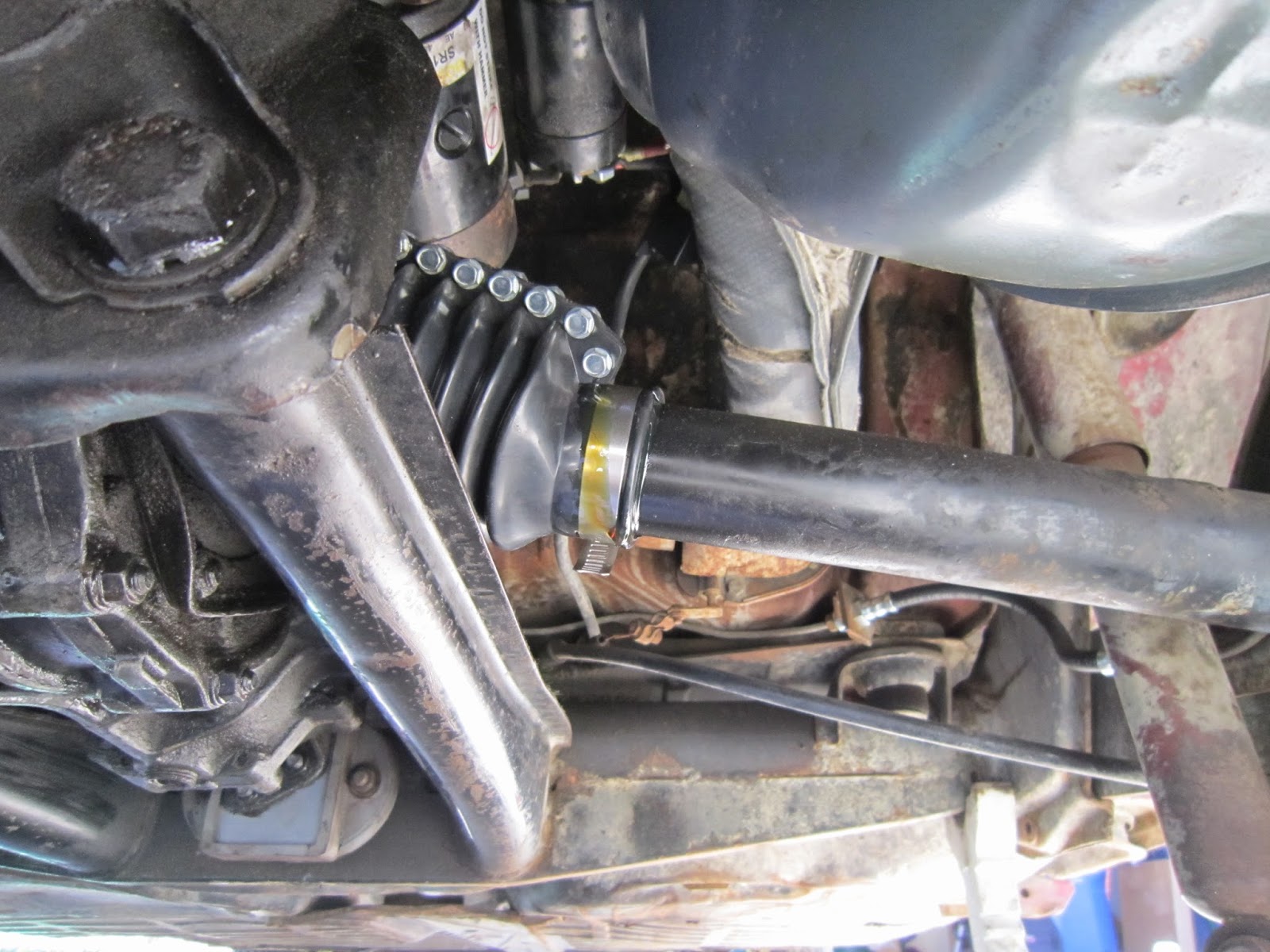 Then I discovered that the axle boots leak - a lot.  They didn't leak until I jacked up the car.  The boots are cheap EPDM rubber (they're rather stiff) but I'm not planning to replace them just yet.

I suspect there's something wrong with the transmission.  I tried to get it into 2nd gear and it nearly grinds...a new cable and proper adjustment did nothing to cure the problem.  The shift coupler and bushing are both fairly new looking and in good condition.  I have a rebuilt transmission in the garage and a rear suspension triangle ready for assembly.   Might be time to get on that and just swap them out. 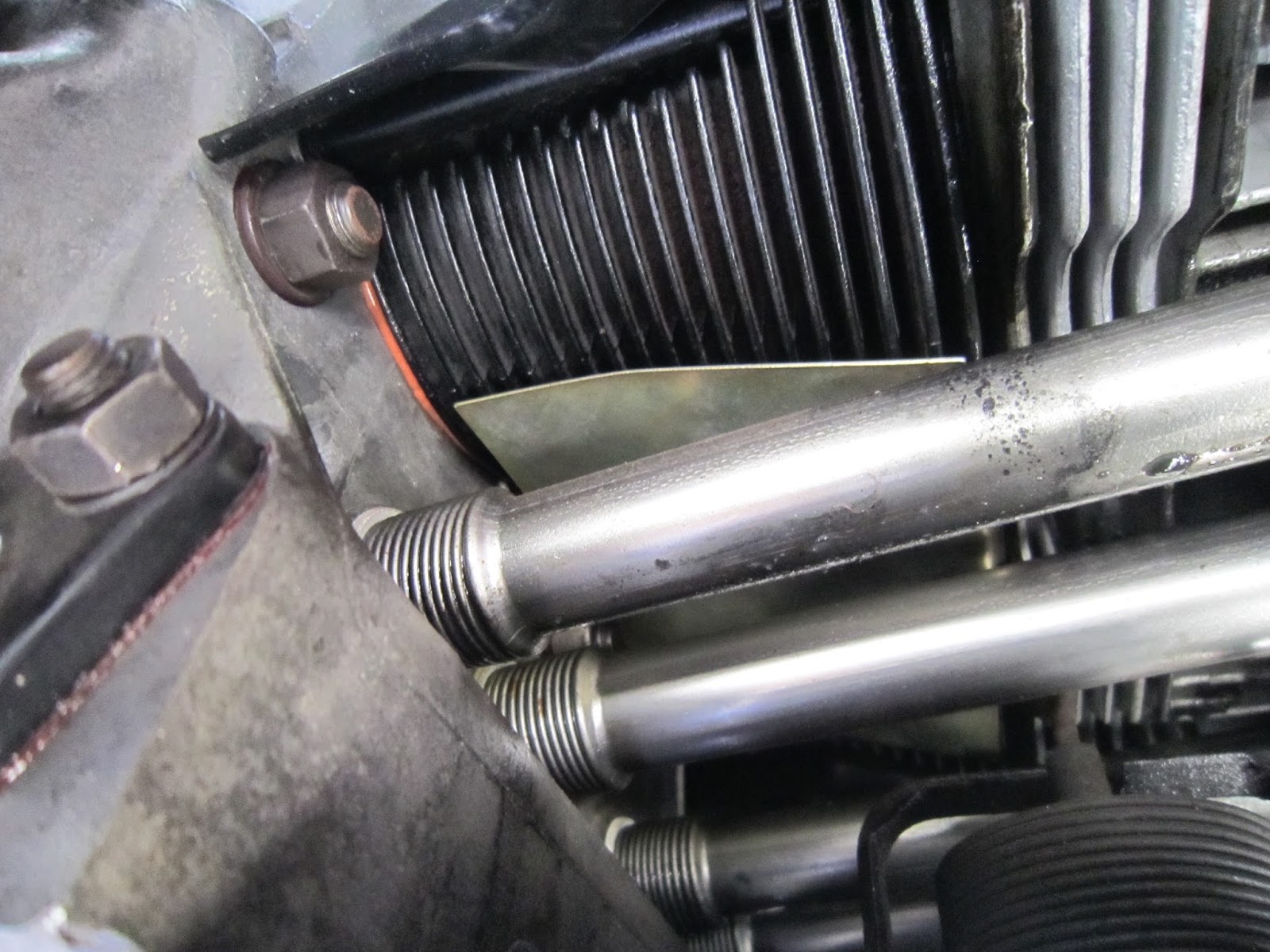 I discovered that something up here is leaking oil and there is a rather loud knocking during idle.  I may have to pull the head to find out what it is and that'll be a lot easier outside of the car.

At least after the engine swap the car will be period correct.  I didn't plan on pulling the engine given that this one is a recent rebuild.  I'd rather swap engines than spend a whole day attempting to troubleshoot this one.

It'll buy me some time to figure out what's going on inside this engine. 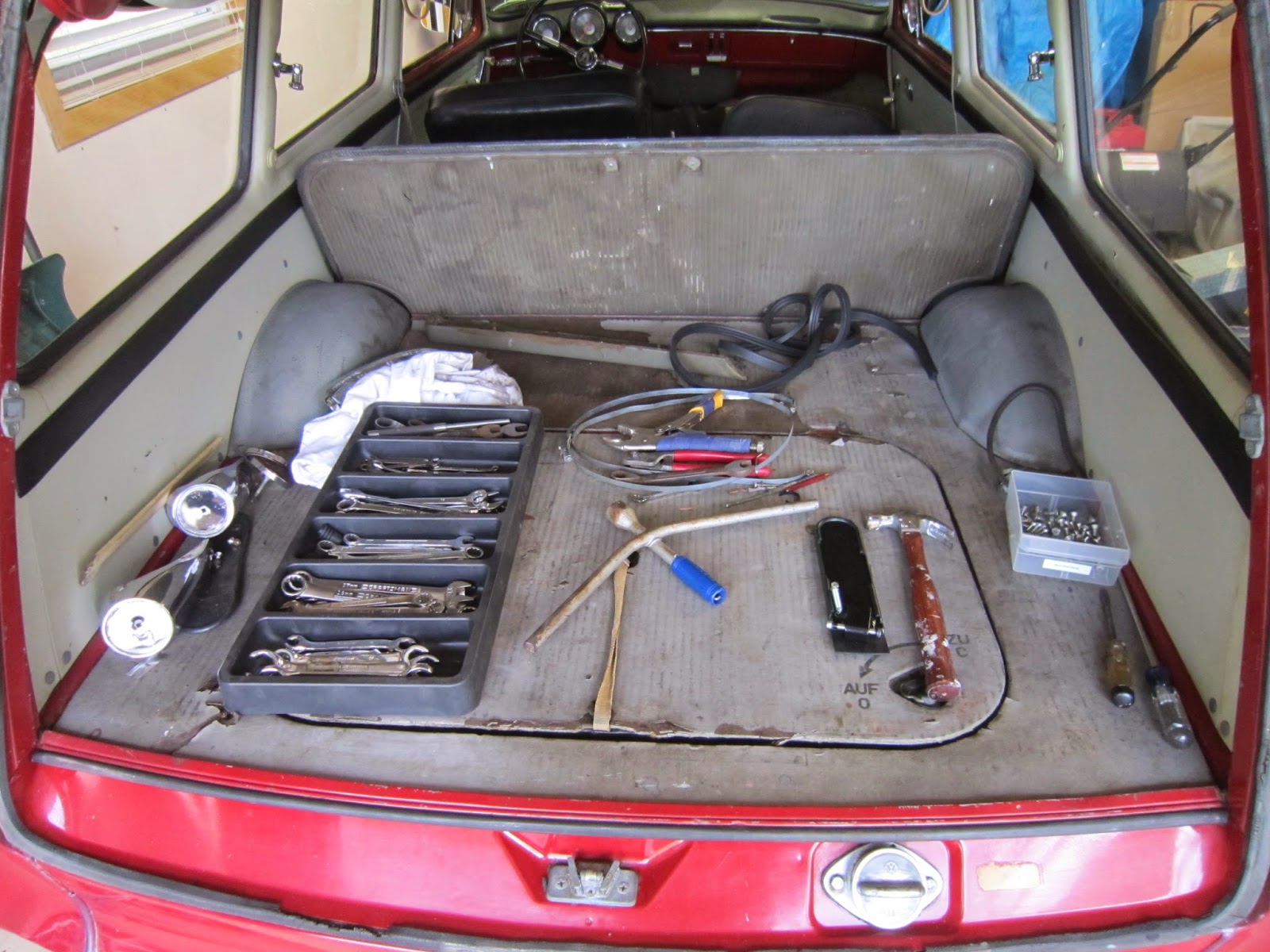 This is how the day wrapped up.  A few things finished, a few things not finished.

I wound up replacing the right rear light housing -  the one on the car had a broken screw in it so the lens would not fasten to the housing properly.

In addition to that, I replaced the hood trim piece with one that didn't have dents.

I removed the engine cover seal but still have some adhesive to remove and a few small dents to bang out before installing the replacement piece.

I have a feeling that I'm going to have to replace the master cylinder and some steering components soon.  The brakes are decent but I suspect that the wrong MC was used during the EMPI disc brake conversion.

It's going to be about a week before I get to work on the car again.  It was a good start but showed me that there's quite a bit more work to be done.

Next weekend is a visit to see how Ferris is coming along in body work and pick up the remaining pieces of Icarus...some of which may wind up on this car as they're the same color.
at April 19, 2014