Everything's fine today, that is our illusion 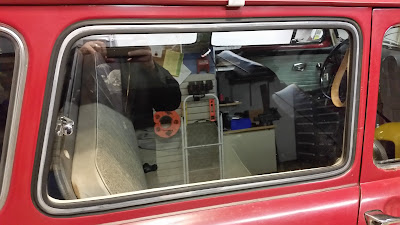 I wound up using the pop out that has decent seals for now - I haven't been able to get the screws loose on a set of frames.  It took a while to get the pop out into the frame but I got it - using a plastic putty knife, pulling the windlace and having patience.  The left side is still the old frame.  I'll get to that later this week. 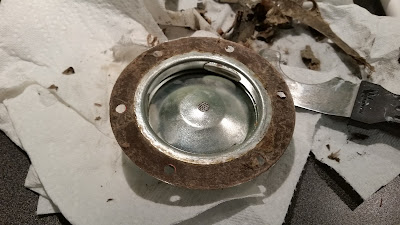 I screwed around with the carburetors again today - wound up with the same result: running rich but running well.  I drained the oil after a short drive around the neighborhood only to find that the strainer and the two paper gaskets are adhered to the engine with Permatex adhesive.  After some work with the plastic putty knife, I was able to get it off.  The strainer is covered in Permatex and the engine still has half of the gasket stuck to it - working out how to get that off in the next couple of days.  I want to make sure I don't do any damage to the engine case trying to get this shit off.

I tried to use a degreaser on the strainer before I do it on the engine and it didn't work.  The photo here shows the strainer (a good thick one) after soaking and a first round with a paint scraper - doesn't look like I accomplished much because I didn't.  I may experiment with a few other methods so I know what to use on the engine case later.

The cover plate required cleaning with a wire wheel on my bench grinder - it's clean but I discovered that it's also warped and the drain plug is damaged...so all of these parts are due for replacement.

Of course, I don't have any spares of these parts so I had to order the parts.  I have placed more orders in the last two weeks than in the last six months.  I'm hoping that this rash of ordering will come to an end soon.

The 'up' side to all of this is that I can pop the valve covers off and check the valves - one less thing to check in the near future.
at May 01, 2016