inching forward, one day at a time 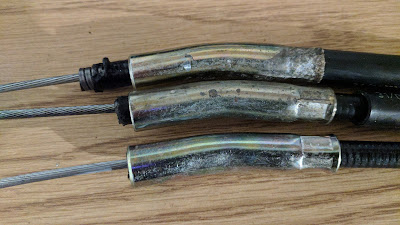 I've accomplished very little over the last week - I caught a cold and then went out of town for work for a few days.  I returned and haven't really accomplished much - too many other 'life' things going on.

The part labeling and organization is largely finished but I stalled a bit at the end - waiting for other 'life events' to conclude so I'd know just how far to take it.

I started looking at the components of the brake kit that I'm installing - one being the reuse of the sleeve for the parking brake.  I pulled the old cables and gave them a quick 'once over' - immediately noticing that the quality control on them was abysmal (top two in the photo).  The bottom one is a new purchase...I would have two of them but issues with my fancy new laptop prevented me from accomplishing that - so I ordered another one today. 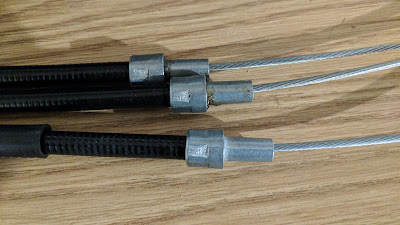 The 'wheel' end of the cables are different lengths as well - this is what happens when 'Made in Brazil' is all that can be found for some parts.  One goes through inspection while the drunk is assigned to quality control and the next is 'approved' by someone who probably should go to an optometrist.  I measured both and they're too short  The bottom one (also made in Brazil) is closer to the proper length but still not right.  I wonder what the fourth one will bring...hope it's close to the new one (meaning that the same level of "quality" is achieved).  I'm going to cut the cables off and use only the sheath for the replacement cables made by ze Germans.

I called the hose shop in town and they confirmed that they can make custom hose to replace three of the connections for the brake line.  All I have to do now is remove it from the car and put together some measurements.  The hoses can be made in a few hours and will also fit in the factory brackets for support.  I'm hoping to get this done this week so that the car can be back on tires and I can finish this epically long brake job and get into tuning the engine. 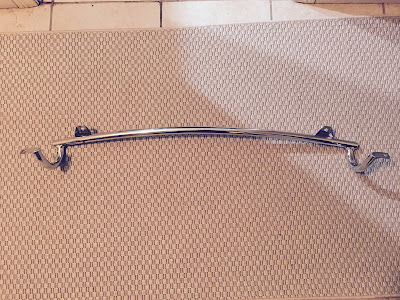 I also bought one of Pedro's last fog light bars - it's something that I've been contemplating for a while - how I plan to mount the fog lights (another project).  I've got the lighting relays and the horn relays to install yet...the projects are stacking up on this car and it's only February.