Even the inchworm makes progress 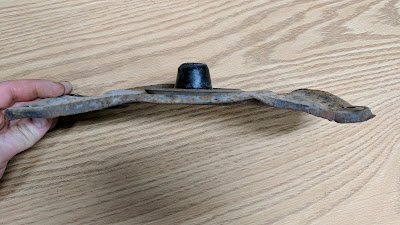 I had a couple of pockets of time today - I spent the majority of the largest pocket cleaning up the workbench and putting tools away.

I did have another look at the reinforcement plate - with the romantic notion that I might heat this thing up and straighten it out so it could be used again...but then I flipped it on the edge and the reality of the situation became apparent. 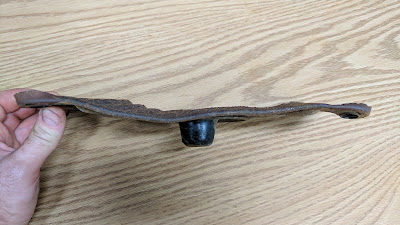 I neither have the skills nor the ability to straighten this thing out - and the time I would spend doing it would not be 'time well spent'.  So I reached out to a few people and I think I've found a suitable replacement.  Fortunately, time is still on my side as far as preparation is concerned.

The plan is to get a replacement and tweak the floor mounts into shape for now so that I can get it all back together and drive it for the late Summer/Fall.  Truth be told - I haven't missed many driving opportunities lately because it's rained so much here over the last several weeks. 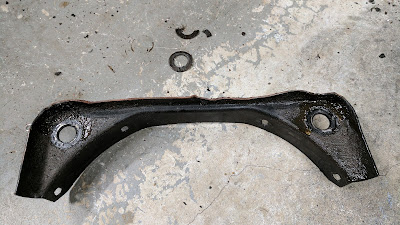 Another thing I did today was remove the rear transmission mount - one of the washers was in three pieces and the bolts have definitely seen better days.

I have a new Brazilian manufactured rear mount that I'll add to the powder coat pile for this rebuild.

Slowly but surely, I'm getting ready to drop parts off for powder coating.
at July 04, 2017