"If we wait until we’re ready, we’ll be waiting for the rest of our lives."

The 1500 S engine, after some delays on the carrier's part, departed on Thursday for California.  I've sold off a few other early engine parts along the way...I'm in the 'dragging my feet' portion of removing the rear subframe but I need to get on it very soon if I'm going to meet the time line of having it powder coated and assembled before the replacement transmission and engine arrive.

I did manage to get a little progress today, however, so things are still technically moving forward. 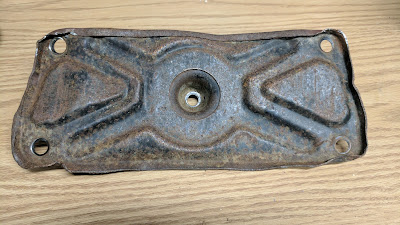 The center support plate was the hardest part to remove.  Two of the bolts were wedged into place by bent metal.  I had to dig out the hammer and chisel to bend metal back to get at the bolts.

The last one caused more trouble because the square weld nut inside broke free.  The floors are in much worse condition than I initially thought.  The whole rear section starting about halfway under the front seats to the rear where the battery sits is rusted through and there's not much holding it all together.  I'm kind of surprised I haven't put my foot through the floor. 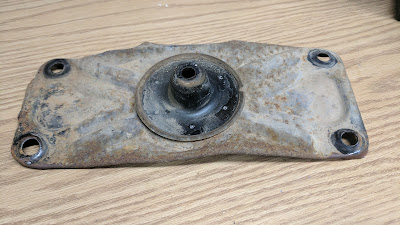 This piece is destined for the scrap bin.  There's no saving it.  The trouble is that I don't think a straight one will bolt up to the existing floor pans...which means that I could do the floor pans.

On one hand: restoring the pan wouldn't be that big of a job but it would be time-consuming (time is a commodity that I'm currently short on due to my workload).  It'd be hard to restore the pan and not slip into a full blown restoration - which would defeat the purpose of trying to get the car running/driving and enjoy it for a while before starting the restoration.

On the other hand: I probably should find a stopping point and just drive the car for a while.  That's hard to do knowing that I could just pull it apart and get the restoration going...start using the parts I've been collecting for years.  I'd really like to pull the pan and get that fixed up but it's such a slippery slope...might be a 'game day' decision.

At minimum, the rear subframe will be completely restored.  I guess I should be okay with that and move forward but I can't help but realize that I'll wind up doing this all twice (now and later).

Evening edit:  I was able to get quite a bit done today - these cars come apart rather fast- it's getting them back together that's hard. 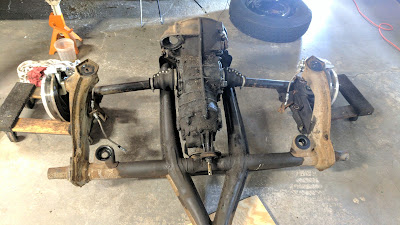 I put the tires on the rear end and removed the bolts.  I used one of my little dirty carts to hold the front end so that when it came down it wouldn't hit the concrete.  It worked out pretty well.  Once I got it out from underneath the car, I removed the rear brakes, then the transmission, then the spring plates and torsion bars. 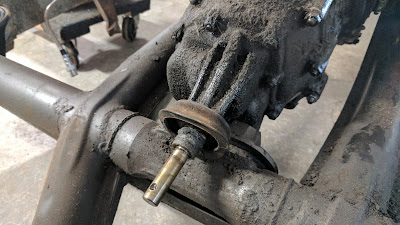 I'm fairly certain that this is either the original gasket or it's a cheap repop - it's borderline crunchy/soft. 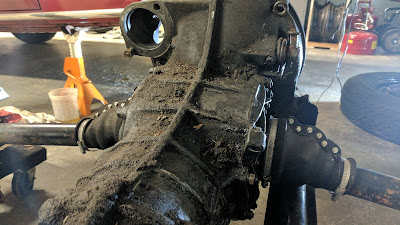 Typical VW transmission - completely caked with oily dirt.  I did the boot seals right after buying the car and they seem to have held up rather nicely.  I've got a new German set on the way and they should arrive before I need to put the new transmission back together (install the axles). 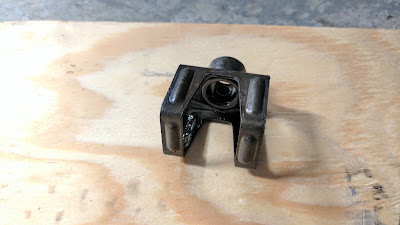 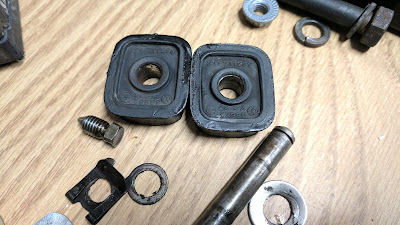 I can't tell if this rubber for the shift coupler is new or was taken from a new one and placed into the OE cage - the clip style clamp was a nice sight though.  The hockey stick bolt was safety wired - so someone has been in here recently. 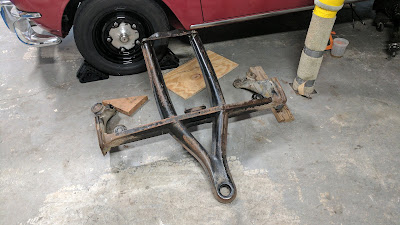 The rear subframe almost stripped down to its core.  I have to figure out how to get the trans cradle loose.  I got in touch with a local Type 3 guy and he might bring another subframe over - if it's nicer than mine, I'll buy it and have it powder coated.  If not, I guess I'll work with what I've got. 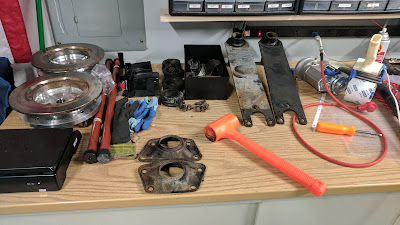 It still somewhat amazes me at how fast these cars come apart...

I also bought new rotors for the rear from CIP1 while they had the CSP rotors on sale with free shipping.  I'll see those in a couple of weeks - I'm in no hurry since this won't go back together for about a month. 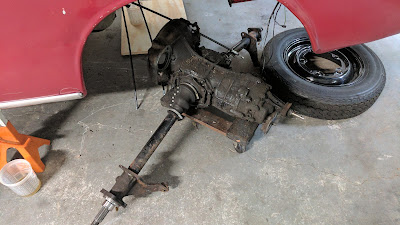 The only thing I didn't get off yet is the spacers for the rear brakes but I figure they'll come off when I pull the axles. 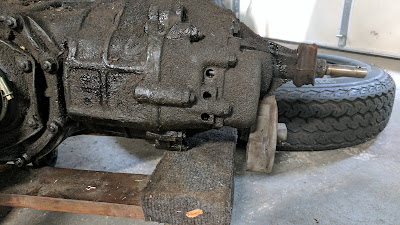 I noticed these three holes on the side of the transmission when I was putting it on the cart - pretty sure you can see right inside.  Not sure why there are three holes here but I'm thinking they should have plugs and not be open to the world.

The fluid that came out of the transmission was fairly clean and amounted to about 2 quarts.