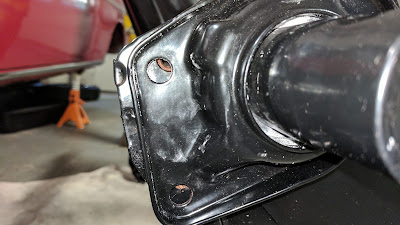 I snapped a photo of the misalignment on the cover when the spring plate is in place.  I've conceded that I will have to remove this spring plate - mount the subframe in the car, level the car, measure the proper angle for the spring plate and reinstall.  Given that I'm in the midst of a certification preparation - this is going to sit for a few weeks. 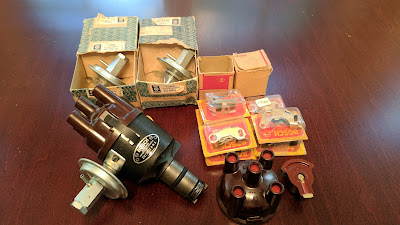 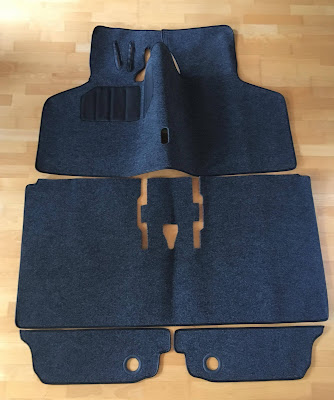 Since I know I'm highly unlikely to use the original distributor again, I decided to sell my last NOS ZV/JCU 4R3 distributor and spares.  I posted it up on Facebook groups and TheSamba.com.  To my surprise, it sold about 3 hours later to a guy who owns some very nice cars - I'm happy that it's going to a great home.  Selling this distributor pays for the carpet kit that I have on order.

Yeah, the rubber mat that came in my car originally is drying out and cracking/falling apart.  It's only a matter of time before there's nothing left of the rubber mat, unfortunately.  I do appreciate that it'll be a bit quieter in the car with the carpet and the sound deadening that I recently bought.  There's a very slow crawl to a complete car - one or two parts at a time. 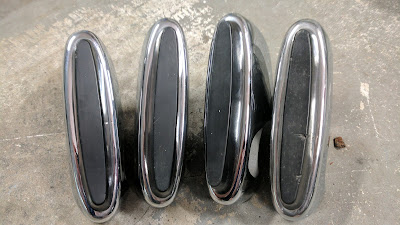 I've been on the fence about selling my bumper guards with the rubber ends that I bought a few months ago.  I've seen them on a few different cars now and I don't think I'm going to use them and I'm in a 'slim down' mode so it kind of makes sense to sell them.

I also found another source for the Boge steering dampers so I bought two more.

The driver's side mirror that I bought was shipped to the wrong address - the seller responded today telling me that they are shipping a replacement.  Sucks that it got lost but maybe they'll get lucky and it'll get returned to them once the recipient realizes it's not addressed to them.
at September 07, 2017