The bones of Icarus 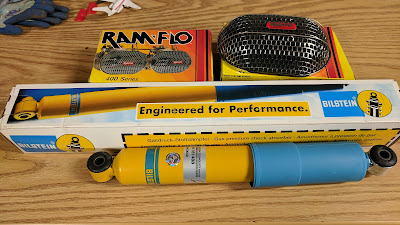 Some of the other parts have started arriving over the last couple of days.  The RamFlo air filters came from the UK, shocks came from Ohio.  I found a killer place for the shocks - they're typically around $90 each.  I got these for $65 each.

The industrial tins came in today as did the adapter for the fuel line (8mm to 5mm) for the front end.  I think all that's left now is fuel hose and some clamps.  When the pan is restored - I'll swap the internal line from 5mm to 8mm and then eliminate the adapter. 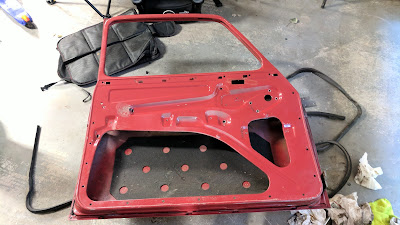 I pulled out the spare door that was on Icarus (the 65 I bought out of New York several years ago) and cleaned it up because my kid was stir crazy (home sick with strep) and he needed something to do.  He's starting to like working on the car so I'll take advantage of it whenever possible.  The inside of the door, the hinges and the frame are in good shape - the outer skin, however, is dented in a few places. 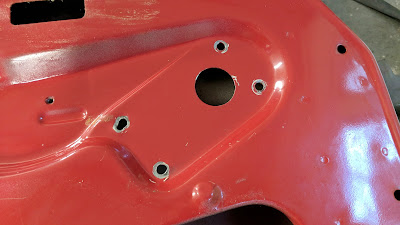 The window regulator bolt holes are a little rough on the bottom end...which is odd because the windows on Icarus seemed to work just fine.

I just bought a ton of NOS parts - they'll show up at the end of next week - hopefully right around the same time the engine/trans should show up.
at September 21, 2017