I've decided to do weekly posts to consolidate several posts into one.  Perhaps, it'll make it easier or faster to read.
Jan. 22: 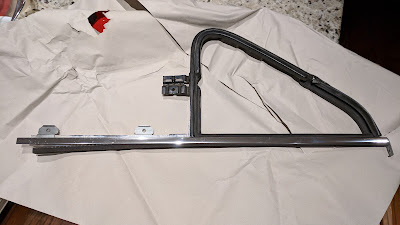 The wayward left side vent window frame has finally arrived.  It was scheduled to be delivered on Saturday - I stayed home all day on one of the warmest days in recent memory and the letter carrier claimed that he didn't have the box in his truck.  I think he was full of shit and chose to not deliver it because it's all the power he's got in his job - piss off the occasional customer.

I called the carrier annex this morning and spoke to a supervisor - asked him why the box wasn't delivered on Saturday.  He had no idea.  I then asked him to confirm that the box was on the truck for delivery today.  After a total of 20 minutes on hold and then waiting another 30 minutes for a return call, I received confirmation...so, again, I waited at home all day.  The mail showed up at about 5pm, it was raining, and the letter carrier (same dude as Saturday) was filling out a slip to leave in the mailbox - probably because he didn't want to get out of his truck and get wet to deliver the box to the front door as he should have...I walked out to his truck and he noticed me just as he was about to toss the notification in the mailbox and speed off to the next house.  Thanks for doing the bare minimum, fuckstick. 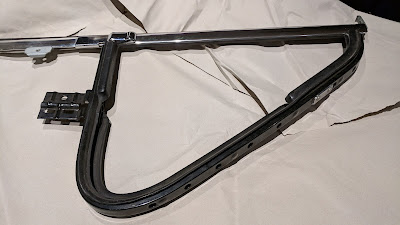 This frame is in very nice condition and the seals are pliable and soft - just as they were when they were brand new.  The aluminum bits are lightly scratched but overall nice. 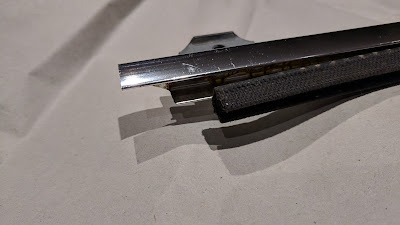 Just like the other vent window frame - the inner small vent felt is about an inch shorter than the end of the channel.  I find this to be a bit strange.

The Wolfsburg West felt channels are still not in stock.  I'm not likely to do anything with this until it either warms up or the aftermarket parts are available...or both.

Jan. 23: Tried to start the car - battery was totally dead and would not charge.  Took it to AutoZone and they were able to charge it back to 100% capacity.  May try to install battery, start car and do some work on it.  I'd like to drive the car a bit and tweak/fine tune it a little so it's more reliable and fun to drive.

Called WW - dude said that he doesn't expect the window felts until the Summer of 2018 because the German supplier was going to make the parts 'when they got around to it'...this might change when I choose to tackle the current window situation.  Another option would be to simply 'close' the windows and leave them alone until I have the motivation to do it properly.

Jan. 24:  Installed the fresh battery, started the car and went for a 10 mile drive.  The steering is way too loose - to the point of the car wandering in the lane.  I'm going to have to pull the front end apart to see if I can figure out how to tighten it up a bit.  May swap steering boxes to see if that helps.  After sitting for 15 minutes, the car did not want to start again (heat soak?) but it finally did start.  Not quite happy with the way it runs still...hoping to get it in with Steve at ProFlow sometime in the near future so he can dial it in a bit more.  Runs way rich too.

Jan. 25:  Sold off some miscellaneous engine and transmission parts that I know I'll never use.  Once I've got a slightly better handle on the scale of how far I plan to downsize, I'll be selling off a bunch of other stuff too.

Jan. 27:  Pulled almost everything out of the storage closet in the garage.  Found a few Type 3 parts that I can live without and plan to post up for sale.  It's probably high time that I narrow down to what I need and get rid of all of the other stuff because it's just taking up space.  I'll be going through a lot of parts in preparation for the move and expect that I'll sell a chunk of my parts before the move. 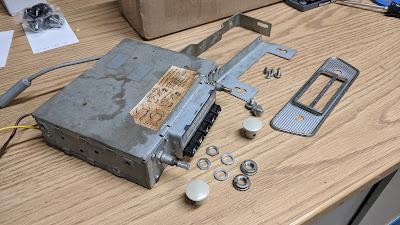 Jan. 28:  Sold the Blaupunkt Essen radio that came with Icarus.  I could have asked $150 for it but I wanted to sell it fast so I listed it for $100 and it was gone within 20 minutes.  Had a chat with a guy in NZ who used the same engine builder - his motor blew with less than 1000 miles on it.  Makes me a bit concerned about the quality of the engine I bought but I also realize that failure can be very random when it comes to engine builds.  For my sake, I hope to avoid a similar fate.

After a little more than a year in Atlanta it looks like we're moving back to Chicago since the job scene here doesn't cater to our career choices.  None of the other out of state job prospects have turned into job offers.  The lease is up on the house in May and the plan is to have a solid plan to move by March, be significantly packed by the end of April and out by mid May.  This also means that whatever the status is of Nigel at the end of March will be static for probably six months.  And, unless something I desperately need pops up for sale, I'm done buying parts for a while.  Highly likely that we'll move back to a short term apartment before buying a house so Nigel and the non-essential stuff will go into storage.
at January 28, 2018