Go forward slowly, it's not a race to the end 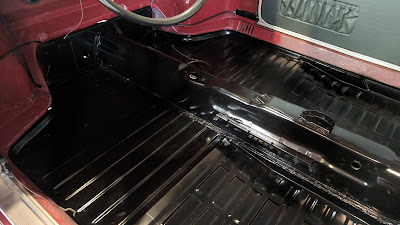 Out of absolute boredom and morbid curiousity - I went out to the garage and decided to get something done on the car - no matter how small or insignificant.

It started out with chasing the threads on the captive nuts for the body to pan - every one of them has great threads and they were fairly clean.  I used a pan bolt coated with anti-seize in the hopes that it'll be a good preventive measure.

I then moved on to a bit of very minor body work to clean up some bent sheet metal at the bottom of the body.  I know jack shit about body work but I was able to do a rather nice job straightening out the bent metal.  I'm happy with the result of my ignorant progress.

Motivated by those two 'wins', I decided to test fit the pan to the body - to check if all of the pan holes mate up to the body.  If they did - I'd sort the steel brake lines and get the pan installed. 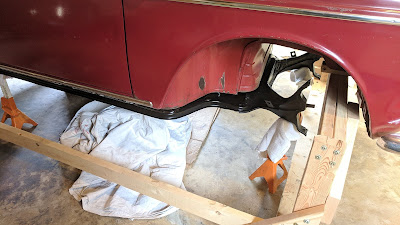 I got the pan under the body and loosely mounted the front M10 bolts (2 of the 4) and two of the rear body to pan bolts.  The two rear-most captive nuts are from the original pan and the front four bolts are also part of the original pan - using those to center the pan on the body, I then inspected the remaining holes for alignment.

The four interior bolts under the back seat are also from the original pan - those holes line up just fine.  So - the rear six bolt holes and the four up front line up.  The rest of the holes are varying degrees of 'not right' and will require some modification to allow the body to be mounted to the body. 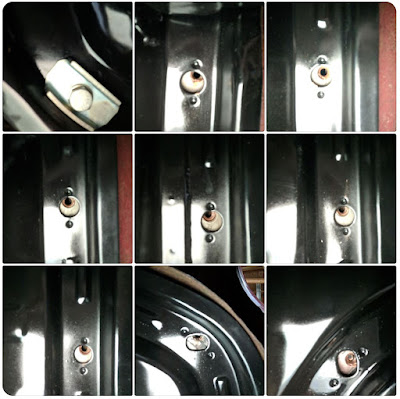 Most of the holes on the left side of the car are off just slightly but they'll require opening up the hole to get a bolt to mount properly.

This is a collage of blurry photos showing the pan to body alignment with regard to the holes on the left side of the car.  Two of the nine holes line up.  The remainder require what I'd consider a minor amount of ovaling to get a proper fit.

Turns out, it's rather hard to get non-blurry photos of the underside of a car in a garage with overhead lighting. 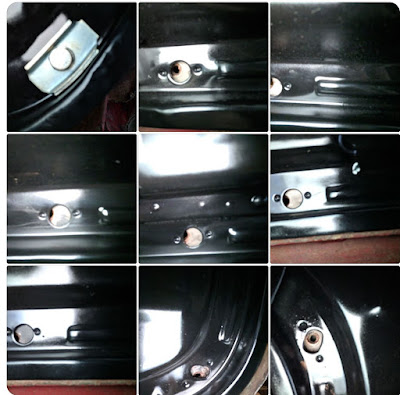 Here's the right side from rear to front - much worse in terms of photo quality and hole alignment.

The guy who did the work said he used a jig to align the pans to the tunnel - he's communicated that he will check the jig against a Type 3 in his shop and then bring it to my house to check against the pan and my car.  It's entirely possible that there's a slight variation in the pan - although I wouldn't expect a large variance because these cars were mass produced and had to fit within a tolerance.  Either his jig is tweaked or my car is tweaked...I'm hoping that it's his jig and not my car.

In other news:  I called FedHill yesterday to talk about brake lines.  Tim was super helpful and eased my mind a little regarding the failure to properly flare the NiCopp line.  He said that it's typically very thin and hard to flare with good results because of the varying quality of the product.  I inquired about renting his flaring tool and buying Cunifer brake line - he's all out of rental tools so I have been put on a wait list.  I'll give the brake line one more shot before I default to the steel line just to get the car done...although now that I have a bit of modification to do - I may not be ready for brake lines anytime soon.

Speaking of brakes - I'm pretty sure I've chased down the calipers and pads that CSP uses in their disc brake kits.  The fronts are from a 1996 Pontiac LeMans/Daihatsu and the rears are from a 1996 VW Jetta 2.0L.  Having this information should make replacing the calipers and pads a less expensive venture in the future.  I've been contemplating painting the calipers so they don't continue to corrode - I think that decision will depend on how long this car is out of commission while the pan and subframe are fixed up properly.

I'm not sure when I'll get back to working on the car again - I'm just going to do it when the feeling strikes me.  At least now the pan is attached to the body so it's one less thing in the garage.

That's all for now.