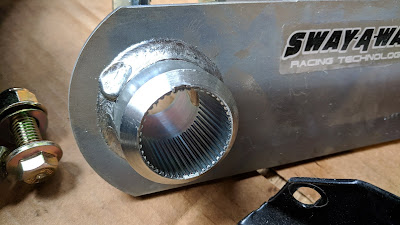 Today - I attempted to figure out the fitment issues between the Jaycee retainer and the Sway Away spring plates.  The Sway Away parts have very large welds that interfere with the Jaycee brass bushing, in spite of the fact that Jaycee has created a large radius to clear the weld.  There's a lot of weld splatter that had to be removed to allow for smooth movement should the retainer contact the spring plate.  The weld splatter removal was the easy part.  Then I hit the learning curve. 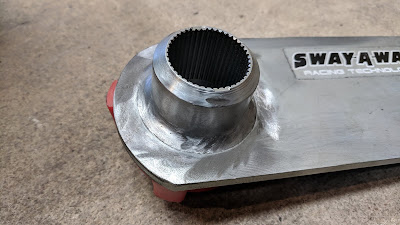 I was able to get the welds ground down enough to allow the Jaycee retainer to move smoothly around the spring plate.  This being the first time I've had to do anything with the spring plate - I tried a flap wheel, a grinding wheel and emery cloth.

The emery cloth was very slow going and didn't seem to be removing the material that is required to get the retainer on the snout.  So I switched over to the grinding wheel - which did a really good job of removing material but it was hard to control the level of removal due to the aggressive nature of the tool.  I swapped over to the flap wheel - slightly easier to control but I still managed to hit the snout a couple of times in places I didn't want to (one of which is shown in the pic).  This is a practice piece so I'm not super worried about it - live, learn and move forward. 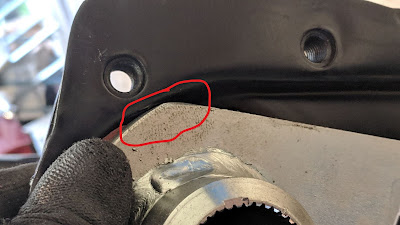 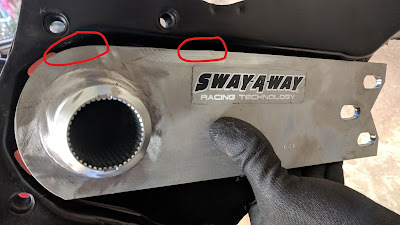 At this point, I had the flap wheel on the grinder so that's what I used.  I wound up getting a bit carried away and removed too much from the top of the spring plate and created a slope.  Oh well, practice piece and all - not worried about it.  I have three more pieces before I get too excited about it.

I'm considering not using the Jaycee retainers and just using stock parts - the variation in quality on the Sway Away spring plates won't be as big of an issue and installation should be easier to deal with.  The rear end won't be quite as stiff as I'd hoped but I don't really plan to launch this car during drag races anyway.  Perhaps I've simply made this too hard on myself and it's time to just dial it back a bit and focus on getting the car back together.  It's clear that I'll never be satisfied with the parts I buy...

Tomorrow will be a dry fit of the parts for the subframe - to see if there are any other issues to figure out.  I won't be surprised if there's at least a handful of problems to resolve before this can be put together completely.
at October 28, 2018