Those who do not move, do not notice their chains 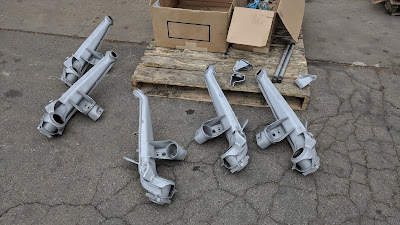 I went out to the sandblasting/powder coating shop and determined what they need to do next.  Larry and I figured that it's possible to get three good sets of trailing arms out of what I had - a couple of bump stop cups would be replaced and one brake bracket would be swapped from a spare arm.  Some time next week - I'll get all three sets back with the axles - all powder coated and ready to go.  From there - I'll decide what to keep and what to sell. 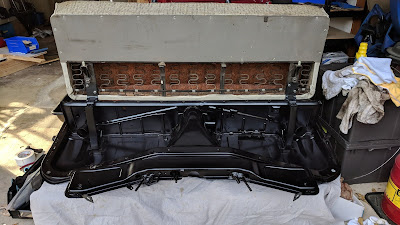 I test fit the rear seat on the brackets and it fits just fine - it's a minor thing but it's no longer a concern.

So - it looks like I'll be on the hunt for that early right side kick panel - or I can just install the late left side that I still have and call it a day.  I'll start looking now just in case I'm able to find one. 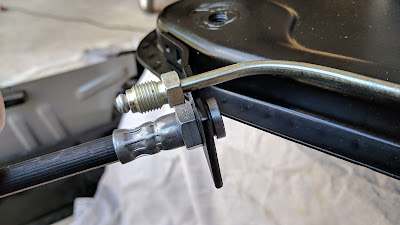 After the shift rod and new shift rod bushing were installed - I started on the rear brake lines and quickly ran into trouble.

The lines that I ordered from ISP are too long - in spite of the fact that they came with the correct part number on a tag - they simply don't fit as the original parts did. 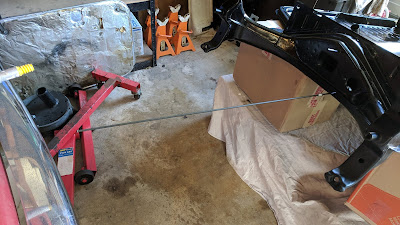 The main line from front to rear was ordered from another supplier and it's probably 2' too long.  I started at the rear of the car to deal with the bends and curves and I'm overall fairly happy with how it turned out. 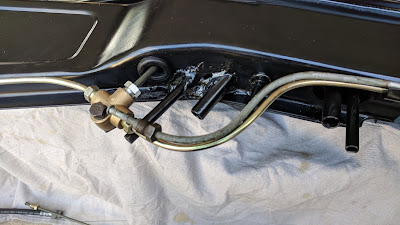 I matched the curvature of the original lines as much as possible with the new lines but they don't fit - they're either too long or too short.  What's the point of putting a fucking part number on them if they're not correct?

I was able to dig up an original old style grommet for the brake line to go through the pan and after some greasing - the line and nut went right through without any issues.  When I tear this car apart again in the future - I'm going to move the mount for the "T" so that the line comes out of the pan straight.  Doing this will eliminate a few awkward bends in the line and bring the right side brake line closer to the pan in the process by reducing the projection of the loop.  I don't know why Volkswagen didn't do this from the start because there's plenty of room to make it simpler in design and eventual replacement. 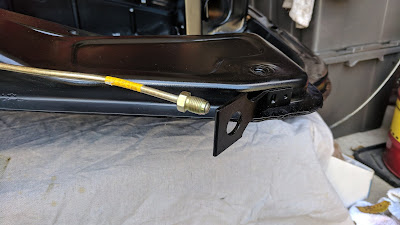 The right side line supplied by ISP is too short by about an inch.  I had a couple of other lines that were slightly longer but they turned out to be too long.

After a little bit of searching and agonizing, I decided to buy a proper bubble flare tool so that I can shorten all of the lines that are too long and eliminate the stress of buying pre-made lines and fucking them up - only to have to buy them again.  Now I can simply buy a roll of line (or longer lines) and make the lines to the length I require.  I'm going to wind up having more installed on the pan when it's mated to the body by doing this but I'll at least know that the brake lines are the proper length and I think it'll be easier to deal with before the pan and body are together.  I can also ensure that all of the brake lines are of the same material and finish. 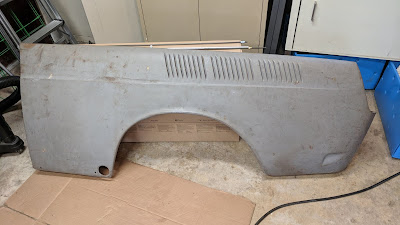 The NOS rear fenders I bought arrived at the FedEx terminal today and I went over to pick them up.  Overall, they're super nice - no trim holes (N model fenders, I'm guessing) but that's a minor issue to resolve later.  They're clean, straight and in great shape! 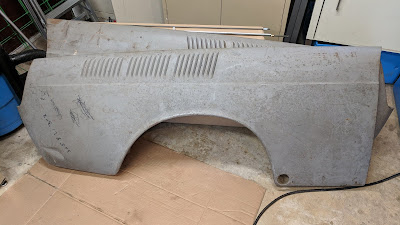 These will save me a ton of money in body work to fix the rear fenders that are on the car - both of which are folded up near the bottom of the airbox.
at October 05, 2018