One road, many journeys. 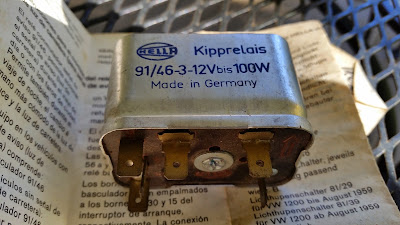 I had an online chat with Greg Skinner about the push button dash assembly in regard to a diagram for it.  The inner workings are a bit of mystery to most and a rather large source of frustration when they stop working.  VW did, as Greg reminded me, replace the push button assembly rather early in life and in the middle of a model year.  The push button assembly was ended mid-April 1964 at VIN 0423139.  There had to be good reason for its replacement and I can only surmise it was because of its inherent complexity...one that the Germans, who tended to over-engineer many things, found to be too complex and fragile.

So in my quest to upgrade the electrics to more modern equivalents, I searched many threads, read a very wide array of potential contributors to my 'desire'...now 'need'...to use modern electronic flashers/relays while retaining most of the original features not found on later cars.  With the help of another, more knowledgeable individual, I believe the issue has been solved.  The only way to really test it out is to hook it up and see what happens.  I'm hoping to do this very soon.

The 4 way flashers were another thing I intended on installing since I am under the dash and most of the guts are out.  As mentioned previously, I bought and intended on using a 9 pin flasher...then found the idea of using a DPDT relay and two standard flashers (lots of wires and connections but easy to find replacement parts) before Greg mentioned something in his reply to me that, I have to admit, was so simple that 1/2 through reading his reply I thought "Why the f**k didn't I think of that?"  It's the Jokon 4 way flasher accessory.  It's still a load sensitive system which won't work with LEDs but if that modification was made necessary, I would modify the Jokon relay and not the wiring on the car.  I found one on German eBay and bought it.  It should be here near the end of the month.  I will have the parts and diagrams for all three options so I just have to decide which one makes the most sense at the time of installation.

The car will still be sitting, waiting, so there's no rush.  I'm burned out on working on this car right now.  I'm focusing on little things that I tend to ignore vs. attempting to tackle large scale tasks.

The best thing to do when I'm stuck is take a step back, contact more knowledgeable people and collect opinions about how to resolve issues.

I've got what's likely to amount to my last parts order for a while, coming from Germany in the next 10 days.  In that order are the studs for the transmission mount for Ferris-which will allow me to get the rear sub frame assembled and start to put brakes on the axles, assemble a front beam, etc.  If I can get a little more space in the garage I can start to assemble Ferris.
at September 11, 2014