A post about parts - no progress on the car 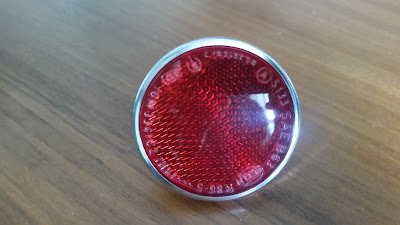 Found an NOS reflector - a part that you might think is in abundance given the location on the car and it's proclivity for damage in a collision.  Surprisingly hard to find, actually.  I've got plenty of used/semi-damaged reflectors and now this one super nice one. 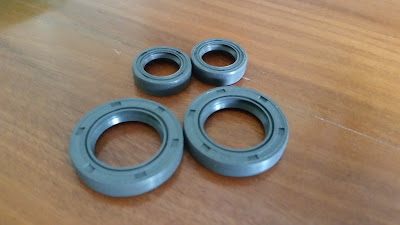 Two sets of seals for the steering box.  I have an NOS set in the cabinet and bought another set from a guy on eBay.  I'll have four sets of them and hope to get at least two boxes rebuilt since the one on Nigel is leaking after less than 200 miles of use.  I'm still working on how to properly take the old box apart so that the paint can be stripped off. 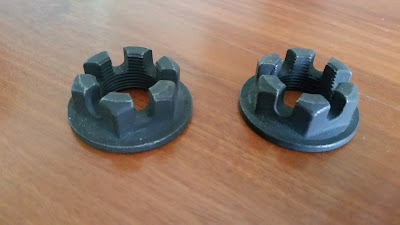 Pair of NOS rear axle nuts - $12 for the pair shipped.  A deal I probably should have, but didn't, let go.

I think this is a clear sign that I'm running out of stuff to buy for these two cars - critical max is being reached and I've got to carve some time out to actually start working on them soon.

I was out of town for most of the week so I didn't get to work on the car.  I think I'm going to pull the Koln column out of the car and replace it with the SWF column so the turn indicators will work properly.  At this point, I should probably also do the modification to the turn indicator lights in the dash (since I'll probably have half of it torn apart anyway) and, possibly, test the tach to see if I really did fry it last year by not hooking it up properly the first time around (no ground).  If it's fried, I'll send it out to be repaired.  It'd be nice to have something to fill that hole in the dash.

Not sure yet what I'm going to do about the wandering in the steering...I could replace all of the tie rod ends with new parts (some are old/NOS ends) and attempt to straighten the steering wheel at the same time, which could make it better or worse.  I'd like to get the horn fixed so I can put the steering wheel button back in and close up the interior a bit better so I can drive the car more often than once every couple of weeks.
at July 16, 2016