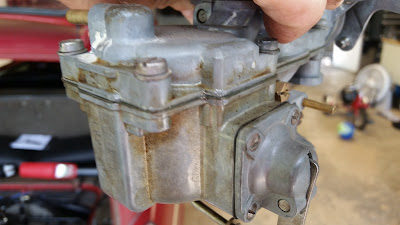 After spending a collective 6 hours tweaking, tuning and listening...I decided to pull the carburetors.

This is the left side carburetor and it appears that the top gasket is leaking. 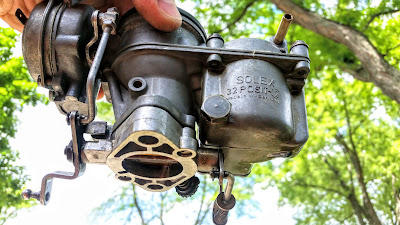 The throttle shafts are both super loose and both leak a small amount of fuel - likely part of the reason I struggled to get the idle stable.

In this picture, there's a bit of fuel collected on the bottom of the bowl.

Upon closer inspection, I also found some of the linkage parts have considerable wear - additional things that contribute to poor running and inability to properly adjust for smooth operation. 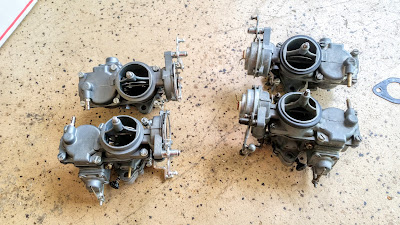 The pair of carburetors on the left were rebuilt a few months ago.  I'd no plans of using them anytime soon - thinking that they were a spare set I could hang on to for a while.

I pulled one of the carburetors off of the engine for Ferris and those throttle shafts were loose as well...meaning that I'll be sending them out to be rebuilt.  The pair that came off of Nigel will also get rebuilt but probably not for a while due to the cost/necessity factor. 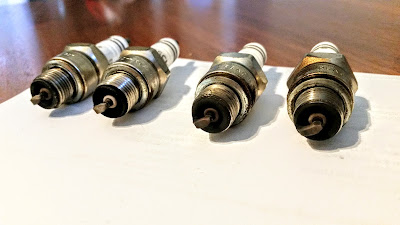 In addition to replacing the carburetors, I also replaced the ignition wires and the spark plugs - I have never looked at them and didn't know what shape they were in, if they were gapped properly, etc.

I also bought a timing light/dwell meter with tach.  Once I get the swapped parts all put back and dialed in, I'll try to get the timing figured out, then check the valves again.
at July 09, 2016