After screwing around in AutoCAD for the better part of three hours - I wasn't able to make anything even remotely resembling the template I made out of paper...so I reached out to my counterpart and asked if I could 'hire' him to input the part template into AutoCAD if I sent him the part.  He agreed and now the part is on its way to Arizona.  If all goes well, in about 2 weeks, I should have the part in hand...and have a plan for hoses to finally close up the engine.

I was in a bit of a time crunch as my laptop (first computer I've owned in the last 15 years that I didn't build) had to be sent in to Dell to be repaired.  The battery was swelling and pushed the touchpad out of the frame.  I might have it back by the end of next week.

I spent a bit of time holding the Setrab oil cooler up in various places over the subframe/transmission area trying to find a suitable location to mount it...after lots of holding, thinking and head scratching, I decided that it's going to have to be mounted to the sheet metal tray that's over the transmission - with the fan pulling the hot air down.  The IRS rear end has a lot going on - add to that the rear disc brakes with wily parking brake cables, the accelerator cable, clutch cable, fuel line and there's just not that much space under there.  I may make one last session of holding it up in random spots on the passenger side since there's less going on with that side but I'm okay with the 'so far' found mounting location.  It'll allow me to move on to other things and feel like I'm making progress, even if I'm only fooling myself. 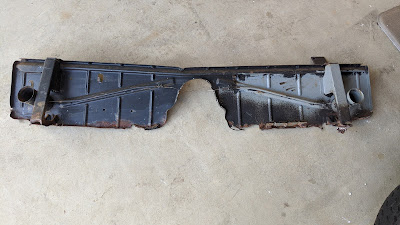 The used rear seat kick panel that I bought showed up - it's in decent shape - hard to visualize now that I know there's a NOS panel en route.  It'll go up in the rafters of the garage for a bit until I figure out what to do with it. 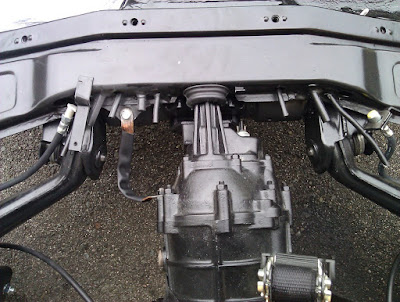 I've been digging through every thread I can find that details the IRS pan Type 3 because I know there are differences - looking for those details that might help me figure out how to route the brake lines from the early pan to a later suspension.

This picture I pulled from Brent's build thread on TheSamba.com is a good shot of a late pan that gives me some good ideas of how to fix a few things on my pan to simplify the brake lines.

Perhaps I'm getting ahead of myself by moving past the oil cooler planning bit...assuming it's ready to be closed.  I really wish I wasn't such a fucking perfectionist - I would have been done with this car years ago. 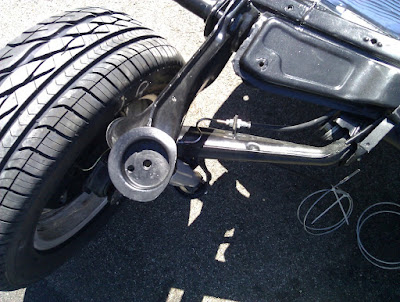 I never noticed before but the late pan doesn't have the set of mount brackets on it like the early/swing axle pan.  I could remove those and relocate the T mount to a more sensible place (the early location for the brake line T is absolutely ridiculous) and simplify the whole thing.  The gears in my head are turning.
at May 01, 2020