“I realize today that nothing in the world is more distasteful to a man than to take the path that leads to himself.” 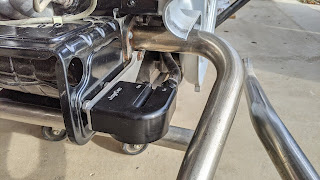 The JayCee filter bracket arrived today - comparing it to the FastFab piece that's virtually identical, this one is of significantly higher quality.  The finish is better, the machining is much more precise and there are absolutely no burrs or sharp edges.

I pulled the oil filter thermostat from the bracket, opened up and assembled the drill press I bought several months ago and drilled two holes in the top section to mount the JayCee unit (shown to the left).  I don't have the right clamps for the drill press so the two holes are not even but the general premise is that with a very slight modification, I can use this bracket to mount an oil filter.  I was able to re-use one of the existing hoses - I measured and ordered the second hose.  I'm going to work on getting this part right before I distract myself with the oil cooler.  I ordered up some modified versions of this bracket to test out as well as button head bolts to get a little more space between the bracket and the tin.  And I ordered a welded fan from Gene Berg.  Once everything arrives I've got enough to keep me busy for a while without the engine.

Need to follow up with the parking cable dude to see what's going on with him - I thought I'd have them by now.