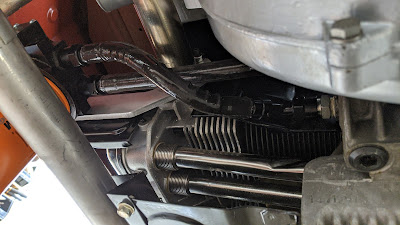 The second hose arrived today - quick fit has proven out that I've likely figured out how to measure the hoses correctly.

I also received a Fast Fab oil filter housing that I completely forgot that I'd ordered.  The thought was that I could plug that into this location and see if I can use these hoses to make the connections and get the engine ready to fire up but the mount holes are M8 and the bracket has M6 holes.  I'm not 100% sure about the oil cooler yet so I haven't committed to removing the bracket and enlarging the mount holes.  As far as the oil cooler is concerned - I'm in no rush to get it installed because it's highly unlikely that I'll need it for a while.  I'm a few electrical connections and an exhaust away from being able to turn the key and fire up the engine so that's my main focus...get it running.

I ordered the new parking brake cables and should see those at the end of next week.  I ordered new brackets to hold the parking brake cables on the IRS trailing arms and a few other miscellaneous VW specific parts while I was paying for shipping.  A few new fittings to get from the thermostat to the oil cooler are also on order...I was hoping to have this all together for this weekend but I don't have enough information to be able to do that but I should be in great shape for mid - next week.

The starter stud was installed but I will have to swap it out at some point because it's on the edge of being too short - the aftermarket starter has a thicker mounting flange that I didn't account for when I ordered the new stud.  I'll order new studs with the next round of hardware now that I've found a local supplier that has what I need in stock.

I'm very close to being able to get the engine going in the car - the weather just needs to hold out for another week or so.

UPDATE: I returned the FastFab oil filter mount.  There were some quality issues that I wasn't okay with, the piece was extremely heavy, the passages were small and they don't come with fittings.  The Jaycee version of this piece looks to be better made and comes with fittings.  I listed and quickly sold the random AN -8 fittings that I bought two years ago - thinking I'd make my own hoses.

I worked out a decent way of getting the hoses from the thermostat to the oil cooler by using fittings.  Given the relatively expensive nature of stainless hoses, I'm waiting until I have the fittings to figure out if I like the way it'll fit together, check it again for hose length and then I'll order the hoses.  Maybe next weekend is the money shot...lots of parts coming in for what seems like it'll be the 'last push' to get this car running.