Only a little work on the car today - I had about two hours on my hands - so I made some patch wires and attempted to test my emergency flashers.  Got it all put together and installed and realized late in the game that the battery for the car is probably dead.  I'll have to test it tomorrow to confirm.  Tried to bypass the switch and the relay didn't click.  The headlights didn't come on when I pulled the switch - only the fuel gauge worked.  I'll try a few new things tomorrow. 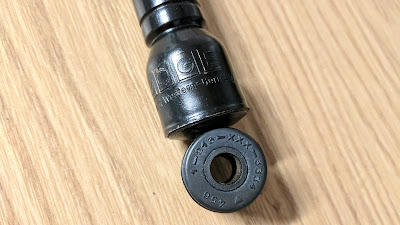 Received a NOS BOGE steering damper today - bought it off a guy from The Samba.  It looks almost perfect and it's in functionally superior condition to the new Chinese ones that I bought after the Cofap versions vanished from the market.  The Chinese copies have about 1/2" of play between fully closed and the beginning of extension - this translates into 'play' in the overall feel of the driving dynamics.

I may have to find another one as a spare.

I didn't do anything with the rear subframe yet - so that's still sitting and waiting for me to get cracking on it.
at August 17, 2017