Got a call from Palo Alto Speedometer today - both tachs are finished and will ship out to me on Monday.  I was informed that the new circuit boards will require that the tach is wired like the VDO - meaning that the signal comes from the tach, the power will be switched with the key and there's a ground.  The semi-annoying thing about this is that I recently removed the wire from the engine compartment to the dash when I pulled the engine because it wasn't going to be used with the Gossen tach.  Now I have the task of getting new wire and installing the wire yet again - although it should be much easier with both the engine and transmission out of the car.

And while I'm on the topic of electrical items - I'm still thinking about tackling 4 way flashers and changing the fuse box to a 12 slot from the earlier 10 slot version.

The powdercoat work should be concluded next week - meaning that I could be assembling the rear subframe soon-ish.  That would be a nice thing to check off the list. 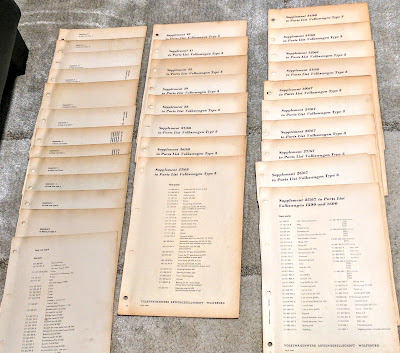 I pulled out one of the Type 3 Parts Books that I bought a while back - it's very worn but appears to be one of the more complete books in my collection.  I'm hoping to get two very complete parts books out of the four that I have and sell off the incomplete books to others who may need them.

A local Type 3 owner contacted me today about buying some parts for a car he recently bought.  It may be time to let go of some of this stuff - get focused on the parts I need and sell off the rest of the parts.  There was some thrill in finding all of the parts but it seems to be time to let some of them go, especially if I'm going to be getting ready to move out of state again.

Now all I have to do is figure out how to swap the solenoid gears on the starter...I can't get the damn clip off of the starter!