How to divest in twenty easy steps 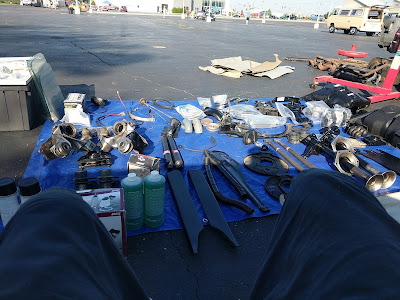 I went to the final local show of the season on Sunday.  I arrived very early to the swap - as evidenced by the near empty parking lot that would be later filled with over 160 vehicles.  It was an interesting show and I got to hang out with some old friends.

My little Type 3 swap space was far busier than I thought it would be and I sold a lot of little stuff and made some contacts for future sales of larger parts or things I didn't bring to the show.

The goal is to sell everything that's not directly going on the car - so a lot of the NOS stuff I bought and have held onto over the years is all hopefully going to someone else's car.  I'm over the experience of it.

I ran into the body guy at the show and he said that he'd be painting the pan and subframe over the next couple of days. 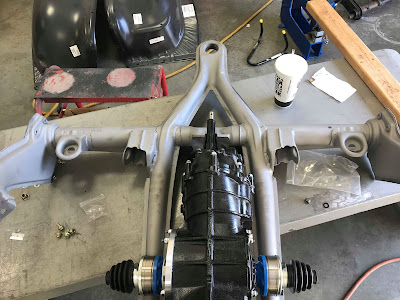 Late yesterday, I received this photo of the IRS conversion and test fit of the transmission.  Everything fits so far.

A keen eye will notice that the kafer/brace bars that I wanted are not present.  I thought about bringing it up but then also realized that it'd just set the whole thing back another three months and probably add a few hundred dollars to the total.  It's already taken too long and pointing this up now will simply delay my already fucked timeline and I certainly don't want to spend any more money on this project.  If it turns out to be a big deal - I'll find a local welder to do the work and re-paint it myself.  So far, however, my thought on this is 'meh - fuck it'. 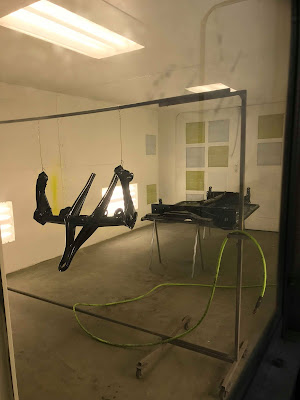 I guess this serves as photographic proof that the pan and the subframe are getting painted...so some progress is being made.

The engine has been 'near finished' for two weeks - no idea what the status is at this point.  Jim's on vacation for a week so I imagine I'll find out after that at some point.  I don't ask him because I don't need it right now and it'd just get in the way if it were in the garage.

I posted up a small list of parts for sale on a FB group.  I have a bunch of other stuff that I really should list - but that'll go to another group first.  Even in grip of apathy, I prefer to sell parts to those who try to preserve the cars in their original condition.

Seems like the harder I try - the greater my regret for having made the effort.  I'm no longer in a hurry - don't have a deadline.  I am not excited by the prospect of looking for parts, finding parts or having the parts - I am excited about selling parts and watching the boxes of stuff go to someone else.

I never really knew the feeling of 'self loathing' until I got back into this hobby - and now, several years later, it's become my voice of reason.  The voice telling me that it's time to divest the collection of parts and try to enjoy the car I'm building...and I'm listening.
at September 18, 2018