Your best teacher is your last mistake 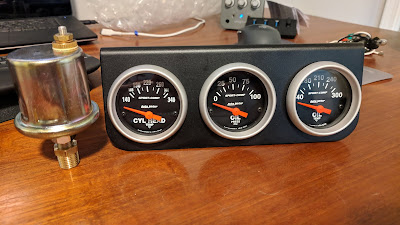 The gauges I ordered showed up yesterday - I mounted them in the bracket to see how they'll look.  I have angle rings for them but they're not installed in this picture.

I'm not keen on the silver bezels - I'm thinking about painting them black to tone it down a bit.  By the time I get around to the installation of the gauges and wiring and everything else - I just say 'good enough' and leave them alone.

I will also have to figure out a solution for the cylinder head temperature sender since I don't currently have a tapped hole for it.  I thought about it earlier on in the process but didn't think I'd find a gauge so getting that done got back-burnered to the point of nonexistence...

The comically huge thing on the left is the oil pressure sender that I am working on a location for mounting. 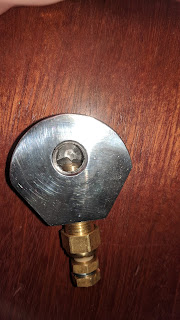 The sender adapter tree thing that I bought from ISP West is not going to work because it's not deep enough for the oil temperature sender.  I will be returning this thing once I've confirmed that they're not going to ding me for 20% restocking fee.

So, I'm going to do what I thought I should have done in the first place and purchase two more inline AN fittings with ports for senders.  I tested the oil temperature sender in the one that I have and it fits great.

I need to spend more time listening to that inner voice of mine - it's always right and I'm tired of being wrong while I try to save money or time.  When I'm wrong - I just wind up taking longer and spending more money. 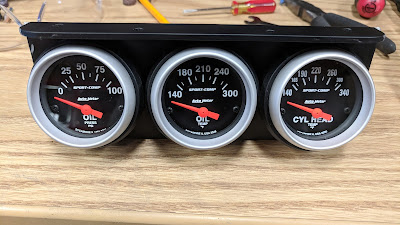 A test fitting of the gauge cluster indicated that a little trimming was required to get it to fit correctly.  I trimmed it a bit and it appeared that it'd need a substantial amount of additional trimming - so I flipped it around and it fit as is.  At this point, I decided to trim the openings to allow the gauge rings to be used and then I installed the gauges and then I held it up to the dash - it fits and the gauges don't stick out awkwardly.  It needs a little bit of detail work before being painted but it's close.

Speaking of dealing with, again, making a terrible decision - I spent the majority of the day cleaning the stock dual spring plates, torsion bars, and trailing arms.  The spring plates are in decent condition but I'm not quite sure how I'll get paint on the inside edges of the two plates.  The torsion bars need to be stripped and repainted/powder coated.  The axles are clean but, again, need to be powder coated.  I'm wishing I'd just spent the money to get the Sway Away parts because I've wasted a whole day only to decide that I don't really want to use most of this worn out, rusty original shit.

Cleaning the trailing arms revealed that there are several points of damage that require repair before they can be used - as a back up - I ordered another set last Friday.  After a bit of conversation - I was assured that they'll show up in much better condition than the first set.

I'm currently considering tossing this stock shit in a bin and ordering up the SwayAway stuff.  Using the stock parts at this point means that I'll wind up spending another $500 just to get it right when I can spend $600 to buy new parts.  I'll clean up the stock stuff and save the extra set of trailing arms for a future narrowed rear end if I decide that the stock wheels are too thin.

According to Jim, he's going to be done with the engine on Tuesday...then I will get the exhaust welded at the collector...once it's in the car, I'll figure out the oil filter and cooler locations - then buy the hose/fittings and finish that part before wrapping the header.

The transmission delivery update is Thursday - then I'll to figure out the pan, subframe and rear suspension shit...there's zero chance I'll be done before the 15th.
at September 02, 2018