Walk on following a fate line 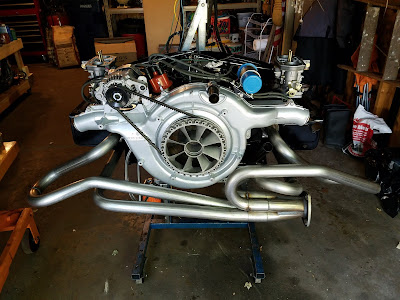 We're this far - the engine is nearly complete.  Everything is hooked up and, absent the pulley cover tin, the engine is ready to go.

I received the AN fittings and the hose - once Jim is done with the engine, I'll be moving on to getting the exhaust collector welded up properly and then figuring out where to put the oil filter and the oil cooler - which will lead to getting the oil lines and fittings sorted.

There was also discussion about swapping to DCNF carburetors - Jim's got a line on a brand new pair of Berg Specials with Berg manifolds.  I may just pick them up to have them on hand if the price is right. 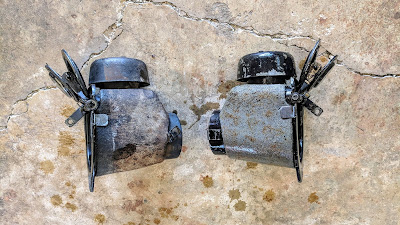 I pulled the warm air mixing box out of the Evaporust this morning.

The left side is 'before' - the right side is 'after'.  Almost all of the crap on the insulation came off but I left it in the mix too long - after I rinsed it off, most of the paint came off as well.  I may wind up pulling the top hat off and removing the insulation to restore them completely.  It'll be a nice 'side project' once the car is back together. 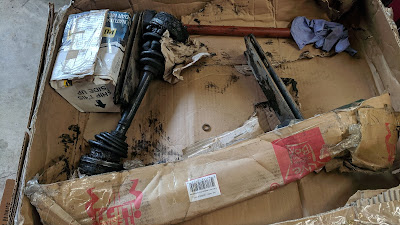 This is one of the two boxes that I received today - exactly as it was packed.  All of these parts could have easily fit into one box and saved me $50 in shipping.  Sometimes it's a giant pain in the ass to buy online...it's really annoying when people ship super dirty parts.  This is likely going to be the last time I buy from this guy. 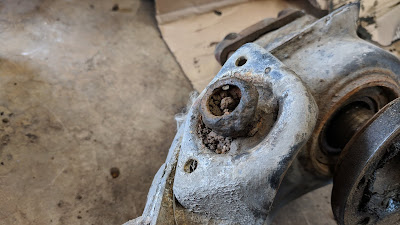 The bump stop mount was full of rocks between the rubber and the mount - it's crusty - who knows if it'll clean up.  It is a hidden part of the trailing arm so it's not the end of the world but it would be nice if it didn't look like shit. 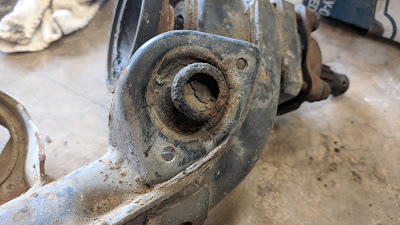 Bump stop mount is crusty - the rest of it is mostly straight.  I'm going to pull out the grinder next week and see if I can get them clean enough to paint...or if I should give up and get another set that's in better condition. 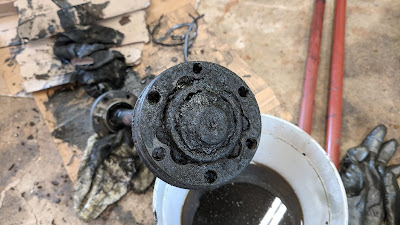 Might be hard to believe but this was the clean one.  I cleaned them off with some gasoline so that I could find the clips that hold them in place.  3 of the 4 CVs came out with a little work and the 4th one refused to budge. 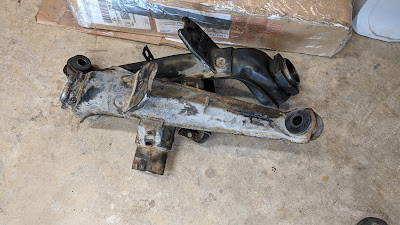 I got the trailing arms fairly clean once I got them apart.  The stub axles were bent/trashed, the bearings were super worn and made in China.  I just have to get the rubber bushings out of the trailing arms.

Next week's task is cleaning them up - straightening out the bent section on the shock mount and try to clean up the bump stop mounts. 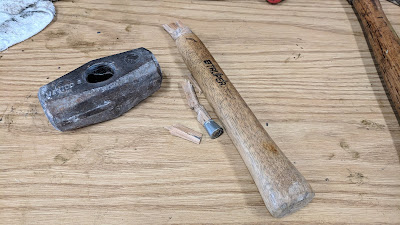 It took so much pounding to get the axle free of the CV housing that I broke my sledgehammer.  I have beat the ever living shit out of all kinds of stuff and not broken this thing.  FYI: It hurts a bit when the head gets free and lands on your shoulder. 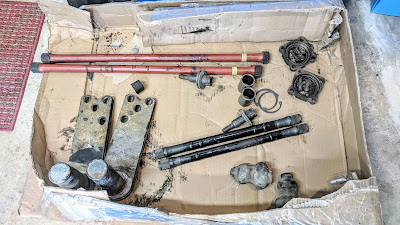 The majority of what remains of what was sent to me.  The torsion cover plates are in Evaporust.  The torsion bars are correct for stock set ups but they'll need to be stripped and painted because the current paint is damaged.

I'm kind of wishing I'd just bought the aftermarket shit - I wouldn't have to clean anything and deal with an endless supply of old grease, crusty parts and sub-par nonsense.