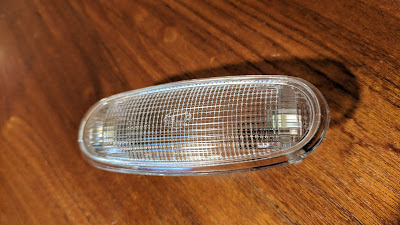 During the 'review' of my current parts collection, I came to realize that I had a rear trunk light for every model of Type 3 except mine.  This light (PN 151 947 111 A) fits Notch, Fastback, T34 - but not Variant.  I put it up for sale in a few places and it generated interest but no takers...and then a friend restoring a T34 let me know that he might have a light that I could use and was interested in a trade. 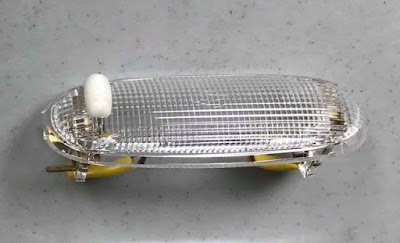 I received this picture today - it's a NOS Squareback hatch cover light (PN 111 947 111 D).  The perfect solution to my seeking - it's the correct lens without the chrome trim and super nice.  After some information sharing - we came to a deal to swap the two lights as there's a mutual 'need for the other light'.  I shipped 151 947 111 A off today and will see this light some time in the future.

The pans are due to be completed this coming Saturday - but I've seen a few very recent pictures that indicate that they're not yet started...so I don't know that the date will be met.  To be fair - I'm still waiting on the shipment of the second jack point that I bought last week.  I don't know that it what's holding things up though.

For the future IRS conversion - I've found a set of jigs that'll be shipped to me this week 'on loan' - the shop will clone them and then I'll send them back to their owner.  Pretty fucking cool that there are people out there who will do this to help others out.  The original guy I contacted about doing the IRS conversion has gone radio silent - which tells me that he doesn't want to do it - so I'm making plans to have it done elsewhere.  The parts collection is going to be the hardest part because I know jack shit about IRS rear ends or how to convert to the Type 2 CVs.  I hope to get through the parts collection without turning it into an expensive lesson...I may have a local solution but I won't know for a few days if that pans out.

Engine parts should be getting shipped soon - just have to wait for it to get shipped...but it's looking like it's going to be next week before the parts show up.
at August 07, 2018