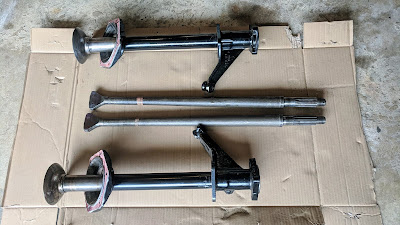 As planned, I pulled the axles and nose cone from the transmission yesterday and posted them up for sale online.  They're a hard sell - meaning that I'll probably have them for quite a while before someone buys them from me.

I cleaned off a shelf in the cabinet in the garage for all of the pieces that are slowly making their way to the house for the assembly process.  I have one order out there somewhere - the spring plates, bushings and stub axles.  I called them today and they're expecting the parts either today or Monday.  Given that it's late on Friday, they'll probably call me on Monday with an update. 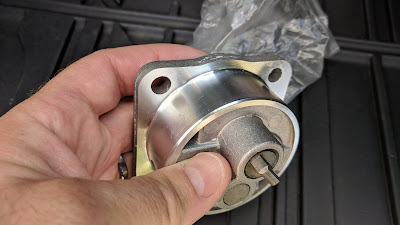 The oil pump was too small for the bore of the engine case - so I reached out to engine dude to see if we can work out a trade for something else...Jim has a proper fitting oil pump so he's going to use that for the engine.

Jim has the short block together - it'll sit for another day or two before he gets going on the long block, then the tin, then the exhaust and the oil cooler figuring...

Still no word from the guy with the axles, torsion bars and the trailing arms...he's the least cost option right now - if he flakes out, I'll have to spend twice as much getting the parts and that'll suck for my budget.  I am still selling a decent amount of parts but the 'good stuff' is about gone and I imagine the sales will drop in line with the selection.

Monday is update day for the pan - I'm going to be looking for a due date for it to be finished so I have time to get it back together and get the front end on it...there's a lot to do with it once it shows up so I'm eager to get it back here and get started.
at August 17, 2018