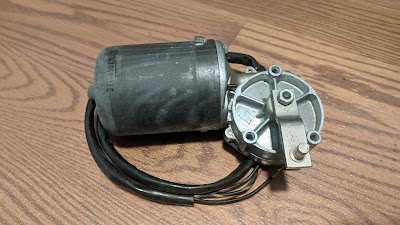 While I was going through my parts, I opened the box for what I thought was a 67 only Type 3 wiper motor - discovered that it was a Type 34 12 volt wiper motor - so it was posted up and sold within a couple of hours.  As much as I loathe Facebook and the groups - they're good for selling parts.  While I'm on this box - I've recently bailed out of over half of the VW groups I belonged to - too much drama and nonsense.  I am burning out on Facebook overall - it's become a platform for people to either brag about a life they're not really living or complain about things that don't matter.

It's been a trying few days...the gauge bracket is painted but my mediocre Dremel work wasn't fully  covered up by the paint...so I'm hoping that the gauges will cover most of it up once they're installed.  I haven't yet reached a point of installing the gauges because of some of this... 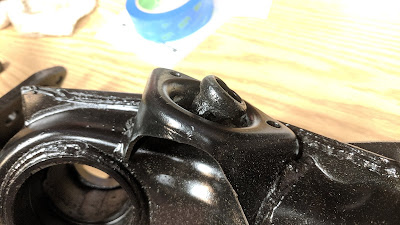 The second set of trailing arms that I bought showed up yesterday.  At first glance they looked pretty good - then I got a little closer and realized that the bump stop mount was rusted away on one of them.  I paid a premium for these so they'd be inspected, cleaned and painted (even if only poorly rattle canned).  I'm not at all concerned about the paint because it's getting stripped off but the rusted out bump stop isn't acceptable. 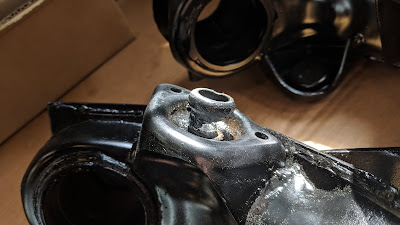 This is a photo of it when I straightened it out - most of it is gone.  I called Chirco (the place I bought it from) and they asked for pictures and told me that they'd send a replacement tomorrow.  The response is exactly what I should expect as a customer - but it's not what I thought would happen based on my numerous issues with other vendors and parts.  Now I just have to wait and see if they actually do it. 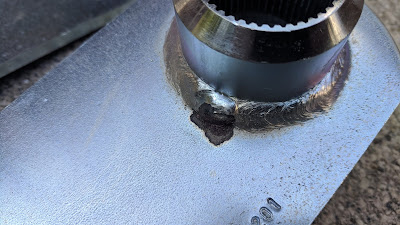 The Swayaway parts were picked up this morning from Jim's house.  One has what looks like a rust spot on it at the weld and a REALLY poor zinc plating.  I'm not super concerned about the rust spot or the zinc plating because I planned to strip it and paint it with KBS. 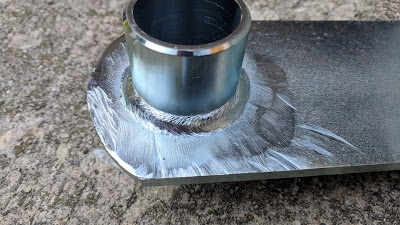 The other spring plate, however, has a really terrible finish on the back side.  I briefly thought about just leaving it alone since it's on the back but then I started to question the quality of the work if it looks like this and was boxed up to sell.

I called CB Performance - who forwarded my issue to Swayaway.  About an hour later, Swayaway called me to say that they're sending a new set that they've inspected.  They seemed a little horrified that this made it to a customer.  In spite of that reaction, it doesn't say much about their quality control and inspection process if this made it to the hands of a customer.

The Jaycee retainers look super nice and the Swayaway torsion bars look great - so I'm 2/3 of the way there...no word from the shop about the pan or subframe.  That means that they have made very little in the way of progress.  Jim is about done with the engine so I'm expecting that he's going to want to drop it off in the next day or two to get it out of his garage.  It'll come here and sit in the garage while I wait for the subframe and pan to get finished.

EDIT: The engine lost oil pressure - the oil pump was pulled and inspected and determined to have an excessive amount of lash in the gears.  It has been replaced and seems to be working fine now.  Jim's going to test it out again tomorrow to make sure the pressure is good and there's nothing else contributing to the issue.

The shop says they have the pan and subframe back from sandblasting.  The subframe needs to be checked to ensure that it's got proper clearance for the CVs at the trans mount horns but we've hit a scheduling snag. The last time the pan/subframe needed to be fit into a paint schedule, the whole thing got pushed back by 3 weeks.  I'm real tempted to just rent a truck, pay for what they've done and bring it home. In the time this stuff has been up at the shop - I've had an engine rebuilt, a transmission rebuilt, two rounds of IRS parts shipped to me, two fuel pumps sourced & rebuilt and I sourced a bunch of other stuff that required research before purchasing.

I found more stuff to add to the pile for the swap on Sunday - hopeful that I'll sell a bunch of it but not holding my breath.  I spent most of the morning today going through the garage and organizing things in preparation for storage vs. work.

The momentum that I had going into this is long gone - the motivation to get it done has transitioned to "getting it done so I don't have to look at a garage full of random parts strewn about" - my desire to drive the car is waning fast.  I've enjoyed the learning process but that's where it ends - the rest of it has been pure frustration and disappointment.

The repeated part quality issues, the delays, the cost and the toll this has taken on me mentally just doesn't seem worth it.  I've decided to focus my efforts on other things and this car will take a backseat to nearly everything else.  The budget I set is charbroiled to the point of not being recognizable any longer - a lot of which is due to paying for parts that wind up being crap and then having to fix them or buy them again.  This hobby has a lot better access to parts in faraway places since the internet came about but most of those parts aren't worth buying because of quality issues.  Pre-internet - the parts were harder to find but they were in a LOT better condition.

Once this phase of the car is done - it'll be a while before I spend any more money on it - this car, and the experiences that have formed as a result of the work I've done, will likely be the exact reason I leave the hobby for the last time in the not too distant future.

Maybe I should have named this car "Linda"...