You need a little bit of insanity to do great things

I went over to Jim's on Tuesday to deliver some new crush washers for the oil sender because he is chasing a slight leak on/near the oil cooler.  While I was there - he discovered that it's not actually the oil sender banjo bolt that's leaking but the oil cooler seals or the oil cooler.  He's got to take the left side apart to resolve the oil leak.  The engine needs a little bit of carburetor tuning to smooth out the idle and running but it sounds good otherwise - the engine itself sounds so much better - not like a lawnmower with a coffee can of bolts sitting on top.  I imagine it'll be next week before the engine is done and ready to go...I suspect that the oil cooler is to blame.

In addition to the engine update - I went ahead and ordered the SwayAway parts - they will arrive in about a week.  I'm on the fence about if I'm going to paint the trailing arms or powder coat them.  I still have to figure out what I'm doing with the axles - I can paint them or powder coat them.  I'd prefer to paint them but the humidity levels here are way too high for painting (75%+) so I can either wait a week or more to pain or I can drop them off for powder coat and wait a week or more for the parts to come back. 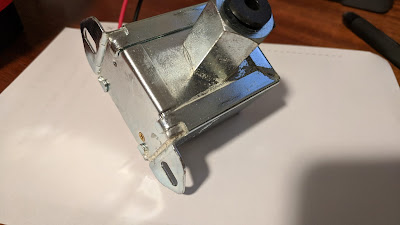 I bought a Facet electric fuel pump from NAPA but it's missing pieces and has some odd corrosion on the pump so I returned it and bought a replacement via eBay.  The Facet pump is much larger and heavier than the Mr. Gasket pump (and more expensive) but I'm going to give it a go - pairing it up with the Malpassi Filter King that I bought several months ago.

ISP responded and agreed to take the sender tree adapter back without applying the restock fee - so it's going back.  I'll replace it with two separate sender adapters mounted in-line between the oil filter and the engine block - assuming I can find a good place with a little extra space for the adapters. 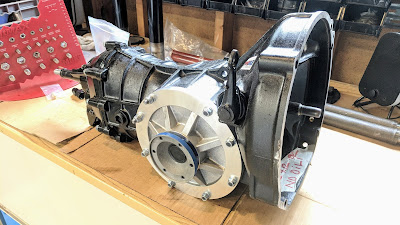 The transmission arrived today.  A careful glance will reveal that it's missing the bracket for the bowden tube.  I called them up within 20 minutes of receiving the box to inquire about it.  After an apology for the omission, I was told they'd be sending one in the mail.

The pan and subframe are in unknown state (no reply from the shop working on them) and the second set of trailing arms will arrive next week.  Early on, I sort of predicted that everything would show up at the last minute - but I'm not sure I expected it to be at the absolute last minute in reference to my self-imposed deadline.  With each passing day - that deadline moves from 'stressful' to 'hilarious' because I acquiesce to the idea that pushing harder to make it happen becomes slightly more ridiculous.

There's a laundry list of things that need to happen and a shorter list of a handful of things that need to be ordered once the engine is installed.  I'd need a week after everything is installed to make it.  So my new/more realistic deadline is the end of the month - and, to be fair, that might be pushing the realm of what's possible.  I'm far too dependent on others with zero repercussions for being late to be able to actually stick a deadline.