For reasons I've yet to understand... 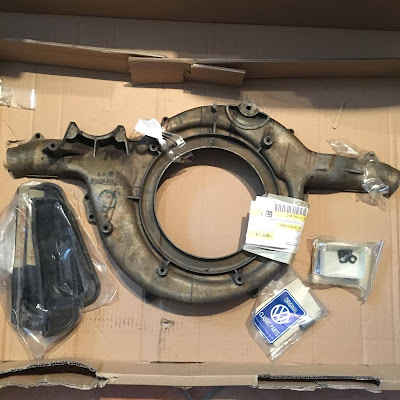 Managed to get my hands on a few NOS bits to round out what'll likely wind up being the end of my purchases for the year...for reasons that will be revealed later.

NOS 3 bolt pulley shroud tops, NOS front half of a 6 volt fan shroud (because you can't see the rear piece, who gives a shit what it looks like?), NOS thermostat spring and NOS Grommet bracket for the thermostat flaps rod.

There's also a NOS 200mm 109 tooth flywheel, NOS period correct wire harness, rear seat kick panel flaps and a couple of other minor parts...and that'll likely be the end of the updates until the next event is revealed.
at October 27, 2016