Forward motion (at least on paper)!

After suffering the setbacks of the past few days, I reached out to a VW expert to discuss the issues I've experienced with the engine...he suggested that the distributor drive gear is off by one or two teeth (which was one of my suspicions) and that it needs to be reset.  Great - progress!

Except I don't have the tool to do it.  So I ordered one.  It'll be here in a few days - which is decent timing because I'm going to Chicago for work for a couple of days. 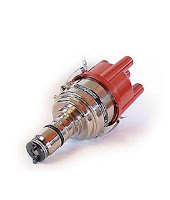 I sold a bunch of parts and bought a programmable distributor which eliminates the points and condenser can.  It's modernization for the sake of reliability.  I will also probably sell off two of the three ZV/JCU 4R3 distributors that I have since I am no longer in love with them after this whole episode.  There's good reason they were only used for one year, I suppose.

By the time I get back, I should have a few boxes of parts at the house - including the parking brake cables.  I'm looking forward to finishing up those brakes so I can move on to other things.
at May 29, 2017